Difference Between Input & Output Devices of a Computer 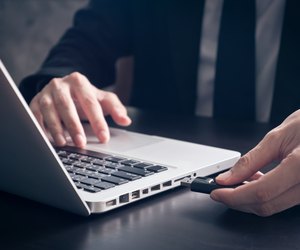 For a computer to be useful, it must have ways to take in information from the outside world and communicate with its users. Devices that take in data are known as input devices. Ones that send out information are called output devices. Almost all computing devices have both attached.

Input and output devices can be built into a computing device, like the screen on a laptop or smart phone, or they can be separate, like a mouse or external speakers plugged into a desktop computer in an office.

Common input devices on modern computers include keyboards, touch screens and mice, which are used to enter commands and data directly.

Other types of input devices pull in other types of information. For example, a computer might have a microphone to pull in audio data and voice commands. Many modern computing devices also have cameras attached, which can be used for everything from taking snapshots to letting users log in via face recognition.

Some computers also have specialized input devices, such as scientific instruments like microscopes or telescopes or barcode scanners used in retail stores.

Most modern computing devices include a screen, a common type of output device used for displaying visual output. Many computers also include speakers, which can be used for communicating with the user by voice or for playing music or the soundtrack to a movie. Computers are also often connected to printers that are used to generate a hard copy of any visual output.

Devices That Do Both

For example, a touch screen displays visual output and takes input from a user. Many printers also function as document scanners. Modems used to connect to the internet and other networks also do double duty. They take in data and send it out to external machines.

The Three Most Common Output Devices for a Computer

Around The Home
Productivity
By: Erik Devaney

The Definition of Input Devices

What Are Computer Peripherals?