Every PC user sees the BIOS screen, whether he knows it or not, every time he turns on his computer. The screen that displays the computer's manufacturer is actually the Basic Input/Output System (BIOS), giving the user a chance to change certain system settings before it launches the operating system software installed on the computer. BIOS is both the name of a specific program and a general term for a type of software. 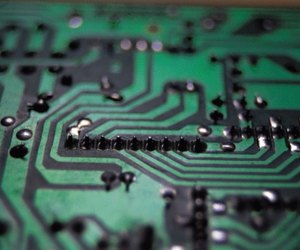 A computer's BIOS is stored on the motherboard.

The computer's operating system does not directly control the computer's hardware. That task falls to BIOS. This program, referred to as firmware, is stored on a read-only chip on the motherboard. It provides the software framework for controlling items, such as the cooling system's temperature, fan speed, the details of how the processor will run and which hard drive (if the computer has more than one) to boot from. It acts as the interface between the operating system and the hardware.

Every motherboard manufacturer produces a different BIOS. Because different motherboards contain different hardware architectures, the BIOS needs to be customized for that particular set of hardware. When there are hardware problems, the BIOS will display a set of error codes to give the user information about the specific hardware. In addition to the motherboard manufacturers, different companies that sell their own brands of complete computer systems will produce and maintain their own BIOS versions. This is why users see the brand of their computer before the operating system launches.

While BIOS was the only firmware service of its kind for a long time, Intel recognized some of its limitations. It consequently began developing the Extensible Framework Interface (EFI). This created an open system of standards for developing firmware for hardware components without the entire framework needing to be architecture-specific. The program grew into the Unified Extensible Framework Interface (UEFI) standard, which is maintained by the United EFI Forum. This is a collection of technology companies with an interest in developing the firmware standard. The forum includes such companies as Apple, Microsoft, Intel and IBM.

It is difficult to directly compare BIOS to UEFI. While they share the same goal, running the computer and acting as an interface between the operating system and the hardware, they operate in different ways. BIOS is a system in and of itself while UEFI is a customizable framework. But UEFI does offer a few distinct improvements over BIOS. For one, it does not require a separate program, a boot loader, to launch operating systems. It also has native support for Globally Unique Identifier (GUID) partition tables (GPT), which can manage hard drives that exceed two terabytes in size.

The Entry Point to EFI in a MacBook Pro

How to Unlock the AMI Hidden BIOS Settings

What Are the Signs & Symptoms of a Bad Motherboard Processor?

Around The Home
Productivity
By: David Perez

How to Get Into the MacBook BIOS

Around The Home
Productivity
By: Emilio Alvarez

How to Get Into BIOS on an Acer Laptop