Known for their sharp, high-definition images, plasma TVs are not without their share of technical difficulties. If you are seeing horizontal lines across your plasma screen, the cause could be something simple in your settings, or the problem could require a costly repair or replacement. The horizontal lines detract significantly from your HD viewing experience, so deal with them quickly to hopefully catch the problem early. 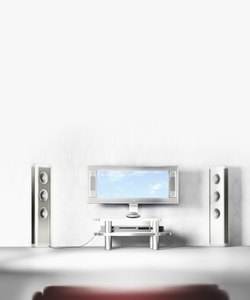 Before you panic, make sure that black horizontal lines across the top and bottom of the screen aren't caused by a wide-screen DVD. Most DVDs offer two options: full screen and wide screen. If your screen isn't set to the aspect ratio that matches the DVD's wide-screen version, black lines will appear across the top and bottom of your screen. Go to the plasma TV's picture menu to try different aspect ratio settings to remove the lines.

Image retention happens when you leave a static image on your screen for an extended period of time. This could show as lines across the top of a video game or the wide-screen black lines. Plasma TVs are especially susceptible to image retention during their first 200 hours of use. Most plasma TVs have a pixel shift function that moves the image imperceptibly to keep this problem from occurring. If you notice horizontal lines that mirror an image you've had on the screen previously, continue watching the television, but don't go back to the show or game that used a static image. The more you require the pixels to change, the more likely it is that you can remove the horizontal lines quickly.

Plasma TVs have up to 40 drivers that power sections of their screens. These drivers may fail because of electrical issues or if they get too hot. Short, black horizontal lines about 3 inches wide appear if a driver fails. Dead drivers typically require you to replace the entire screen, as the drivers are built into the screen's back side.

Horizontal lines on your screen may have nothing to do with your plasma TV; they may be coming directly from the source. If you see lines on the screen -- especially if those lines are traveling or scrolling up or down -- change the channel. If the problem is from your cable or satellite provider, you should see the lines on more than one channel. Turn on a DVD as well. If the lines remain, the problem is with your TV, if not, it's likely with the cable or satellite company.

How to Fix the Lines on an LCD TV Screen

How to Diagnose TV Problems With Blurred Lines

How to Troubleshoot a Hitachi LCD TV

What Causes Shadowing on a TV?

Around The Home
Entertainment
By: Shala Munroe