How Are Graphics and Images Stored in a Computer?

Computer-generated images can be stored in several different formats and differing resolutions. But all computer files, whether numbers, words or graphics, are stored as digital information. What computers do is translate the image into digital code for storage and then interpret the file back into an image for display. How the computer does this involves the manner in which the image was created and the code and formats needed for making a graphic image file and then creating a graphic image display. 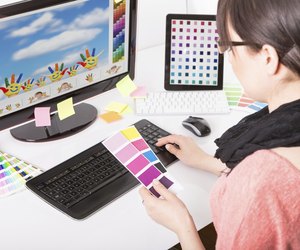 A female graphic designer at work in front of her desktop computer
credit: scyther5/iStock/Getty Images

Digital data is an exponential assembly of code that starts with one and zero. Ones and zeros are bits. Several ones and zeros in a line of code are bytes. Several bytes are kilobytes (thousands), then megabytes (millions) and gigabytes (billions). One byte is a single dot of color or shade of a graphic image. Several gigabytes are billions of bytes arranged to produce a 20-minute full-color video with sound.

Scanning involves using specialty hardware to translate light and color into digital data. Whether you're using a desktop scanner, digital camera or digital video camera, the concept is the same. Light is reflected from the object being recorded to light-sensitive diodes aligned in rows. The diodes are sensitive to either red, blue or green light. Combing these three colors at different levels produces every color from white to black. Once the diode accepts the image, it is translated into electrical current that activates circuits in the scanning device. The circuits then create digital representations of the image based on the information the diodes collect.

Besides scanning in real objects, another way to generate graphic files is using the Postscript computer language to draw and paint images with computer programs. Postscript is a way to represent curves, colors and lines of different widths in a manner that adjusts the image mathematically for size and scale. Postscript images have no ragged edges around curves because the curve is produced mathematically and not using the limitations of the computer monitor screen. Once the postscript file is created, it can be stored digitally on the computer's hard disk.

Around The Home
Productivity
By: Bianca Bumpres How to Find Out the Color Number Code in Illustrator

Around The Home
Productivity
By: Katie Yancey

Around The Home
Productivity
By: Wesley Tucker