How Is Data Stored in a Computer?

Computer data storage is a complex subject, but it can be broken down into three basic processes. First, data is converted to simple numbers that are easy for a computer to store. Second, the numbers are recorded by hardware inside the computer. Third, the numbers are organized, moved to temporary storage and manipulated by programs, or software. 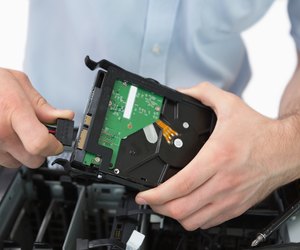 Every piece of data in a computer is stored as a number. For example, letters are converted to numbers, and photographs are converted to a large set of numbers that indicate the color and brightness of each pixel. The numbers are then converted to binary numbers. Conventional numbers use ten digits, from 0-9, to represent all possible values. Binary numbers use two digits, 0 and 1, to represent all possible values. The numbers 0 through 8 look like this as binary numbers: 0, 1, 10, 11, 100, 101, 110, 111, 1000. Binary numbers are very long, but with binary numbers any value can be stored as a series of items which are true (1) or false (0), such as North/South, Charged/Uncharged, or Light/Dark.

The main data storage in most computers is the hard disk drive. It is a spinning disk or disks with magnetic coatings and heads that can read or write magnetic information, similar to how cassette tapes work. In fact, early home computers used cassette tapes for data storage. Binary numbers are recorded as a series of tiny areas on the disc which are magnetized either north or south. Floppy disks, ZIP drives, and tapes all use magnetism to record binary numbers. The data on tapes and disks can be destroyed if they come too close to magnets.

Some new laptop computers use solid state drives for primary data storage. These have memory chips, similar to memory chips in USB keys, SD cards, MP3 players, cell phones and so on. Binary numbers are recorded by charging or not charging a series of tiny capacitors in the chip. Electronic data storage is more rugged than magnetic data storage, but after several years the capacitors lose their ability to store electrical charges.

CDs and DVDs use optics to store binary numbers. As the disk spins, a laser is either reflected or not reflected by a series of tiny mirrored sections on the disk. Writable disks have a reflective layer that can be changed by the laser in the computer. Disks are long-lasting, but fragile; scratches on the plastic layer prevent the laser from correctly reading reflections from the aluminum layer.

Drives, disks and USB keys are used for long term data storage. Within the computer there are many areas for short term electronic data storage. Small amounts of data are temporarily stored in a keyboard, printer and sections of the motherboard and processor. Larger amounts of data are temporarily stored in the memory chips and video card. Temporary data storage areas are designed to be smaller but faster than long term storage, and do not retain the data when the computer is turned off.

Data is stored as lots of binary numbers, by magnetism, electronics or optics. While the computer is operating, data is also stored in many temporary locations. Software is responsible for organizing, moving and processing all those numbers. The computer's BIOS contains simple instructions, stored as data in electronic memory, to move data in and out of different storage locations and around the computer for processing. The computer's operating system, for example, contains instructions for organizing data into files and folders, managing temporary data storage, and sending data to application programs and devices such as printers. Finally, application programs process the data.

How to Scrub a Computer Hard Drive

Around The Home
Productivity
By: Andrew Hazleton

How to Dispose of Computer Disks

How Does a CD/DVD ROM Drive Function?

Around The Home
Productivity
By: Michael O. Smathers

What Are Optical Storage Devices?