Due to the limitations of digital computing in the 1960s and 70s, engineers, technicians and scientists solved complex problems using analog computers. An analog computer generates continuous signals using dials and switches for input, and meters for output. With progress in digital technology, analog computing died out in the late 20th century, though many of its ideas carry on in music synthesizer designs. Though each one solves similar problems, there are several analog and digital computer differences to note. 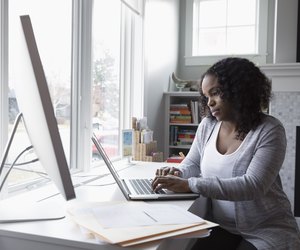 Digital computers produce numbers as output. The computer uses display screens, printers, disc drives and other peripherals to capture this output. Analog computers output voltage signals, and has sets of analog meters and oscilloscopes to display the voltages.

The main feature that distinguishes digital from analog computers is the nature of the signals. Digital signals have two discrete states, on or off. The off state is usually zero volts, and the high state is typically five volts. Analog signals are continuous. They may have any value between two extremes, such as -15 and +15 volts. An analog signal's voltage may be constant or vary with time.

With improved technology, fast digital computers can emulate the behavior of analog computers. For example, a program in a digital computer can calculate a 2,000 Hz sine wave in real time, and with accuracy and reliability that analog circuits cannot match. Analog computers have a limited ability to mimic digital systems.

Few examples of analog computers remain in existence. The components and designs still exist, though few seek to build them. On the other hand, almost all computers working today are digital, ranging from simple appliance controllers to room-sized supercomputers with thousands of microprocessors.

Analog computers must deal with a certain minimum level of electrical noise in the circuits, and this affects accuracy. Digital computer circuits also have electrical noise, though it has little to no effect on accuracy or reliability.

To program an analog computer, you connect different sub-systems together electrically with patch cables. For example, connect a signal generator to a control knob which varies the signal strength.

Size of the Computers

An example of analog computer device could be a small desktop system the size of a large book, but tall racks laden with equipment are also analog computers. A digital computer example could be a tiny microchip that is only a few millimeters square, but it could also be a room-sized server installation.

A digital computer coordinates its signals with a master clock. The clock produces a high-frequency stream of on-off electrical pulses; each pulse being a "tick" of the clock. Every activity in the computer, from comparing numbers to moving data in memory, takes a defined number of clock pulses. The clock's speed determines the computer's overall speed.

In an analog computer, signals simply flow from one circuit to the next, having no pre-existing central coordination. Because of this lack of coordination, analog computers can reveal chaotic and unpredictable behavior more readily than digital systems.

The numeric, discrete nature of digital computers makes data storage simple. A memory circuit copies and retains the discrete states of another circuit.

What Are the Functions of a Microprocessor?

Around The Home
Productivity
By: Giselle Diamond

What Is Digital Technology?