How Does a Wireless Adapter Work?

Essentially, a wireless adapter works much like a radio or television. These devices receive signals and convert them into an output: sound, sight or both. Similarly, wireless adapters convert signals into the electronic equivalent of data, sight and sound for either transmission as radio frequency signals or into data for a computer to process.

RF signals are vibrating electromagnetic waves transmitted through the air. When you use your cellular telephone, you are communicating by way of RF signals. Although seemingly unlimited, the air space in which RF signals are transmitted is divided into a variety of bands, nearly all of which are assigned to specific applications, industries or purposes. The frequencies used for wireless networking are reserved for that specific purpose. The frequencies used in wireless networking, primarily 2.4 Gigahertz and 5 GHz, are divided into fourteen channels, over which wireless network devices communicate. 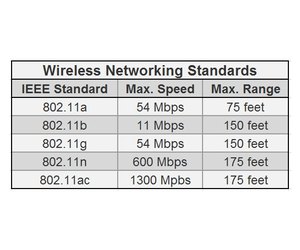 Range is the straight-line distance defined by a wireless network standard in which a transmitted signal remains viable. Wireless signals are effected by distance. As a receiving wireless device moves away from a transmitting device, the signal becomes weaker. The highest bandwidth of a wireless standard is rarely available at the outer limit of its range. In addition to distance issues, the materials a signal must pass through can also weaken, or perhaps even block, a wireless signal. On a wireless network device, signal strength (the number of bars) is very important, just like it is on a cell phone.

Wireless adapters come in a variety of shapes, sizes, technologies and even colors. The adapter that is right for your computer must meet certain criteria: the device to which it will attach, the wireless standard you want to use, which determines bandwidth and range and where and how you wish to connect to wireless (indoors vs outdoors). There are wireless adapters for notebooks, laptops, tablets, phones, cameras and, of course, desktop computers. A network adapter for a desktop computer is typically an expansion card that is installed inside the computer's system case. However, many network adapters connect through a USB port and some are external peripheral devices that connect to a computer through a cable.

So, what does a wireless adapter do? It facilitates the capability for interaction with wireless RF signals transmitted within its range. With a wireless adapter built in, installed in or attached to a computer or wireless communication device, you are able to join a wireless network to communicate with websites, other people or Internet resources.

How To: Wi-Fi Coaxial Cable to an RJ45