How to Connect PC to HDMI TV

The technology powering our computers and televisions alike has evolved significantly over the past several years. Now, more than ever before, individuals have to the ability to use their computer hardware in tandem with their televisions, expanding the viewable display area for their computer in the process. This convenience is due in large part to the implementation of High-Definition Multimedia Interface, or HDMI, technology. Understanding how to route HDMI from computer hardware to TVs will help ensure that you have the best possible experience with your cutting-edge devices. 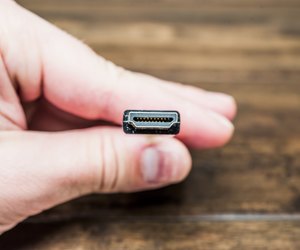 Connecting your PC to an HDMI TV is as simple as locating the HDMI ports on both devices and connecting them using an HDMI cable.
credit: boy4psp/iStock/GettyImages

The Basics of HDMI

HDMI was first introduced in 2002 as a means of sending uncompressed video data between two devices. Since its implementation, HDMI has fast become one of the most popular forms of media transfer in existence today. This is also due to the fact that the technology powering HDMI can be obtained quite affordably. HDMI ports are now a de facto standard on devices ranging from computer monitors to TVs and video game consoles.

HDMI connectivity relies on the use of a compatible HDMI cable. HDMI cables consist of two identical ports, completely removing the need for male/female connector designations. The cable itself is composed of twisted pairs of cables that are also shielded. There are four pairs of these cables in each standalone HDMI cable.

The vast majority of modern computer hardware relies on either HDMI or USB technology to power media transfer today. With that in mind, computer users who are seeking to connect their new PC to an HDMI TV will likely not need to rely on a VGA to HDMI cable or something similar.

In order to effectively make the connection between these devices, the first step is to locate the HDMI port on both your computer and your TV. In some situations, your HDMI TV may have multiple HDMI inputs. In this case, pay careful attention to which specific port you use, as you will need to select this as your designated input at a later stage.

Sending HDMI From Computer to TV

Once your cable has been connected, the next step is to power on both devices. Your computer should immediately detect the presence of the HDMI cable and start routing the display to the newly connected TV. That being said, you will likely need to select the specific port on your HDMI TV in which the HDMI cable is connected. This can be done using the "Source" or similarly worded button on your remote or TV. After locating your source options, select the current port hosting the HDMI cable in order to receive video signals from the computer.

In the event that connecting an HDMI laptop to your TV is not working, you may need to review your computer's system preferences. There is a chance that your computer has not automatically routed video signals through the HDMI cable. This means that you will need to manually select the HDMI port as your intended display source within the display settings of your system preferences.

How to Set Up Your VLC Player for TV

How to Connect a Monitor When the VGA Port Is Broken

How to Send a Movie From My Computer to My TV

Around The Home
Productivity
By: Brent Watkins

Can I Use My Panasonic Viera As a Computer Monitor?

How to Use a Vizio TV As a PC Monitor

How to Connect a Computer to a Sanyo TV