How to Get the Cubed Root on a TI-83 Plus

The TI-83 series of powerful handheld calculators made by Texas Instruments includes the TI-83 Plus. It can work advanced equations by using computing power made specifically for mathematical problem-solving. The TI-83 is a capable calculator, but Texas Instruments also has upgraded models such as the TI-84 and TI-85. You can perform a cubed root equation on all of the models using a similar process. Doing a cube root graphing calculator equation is fairly consistent across the board. 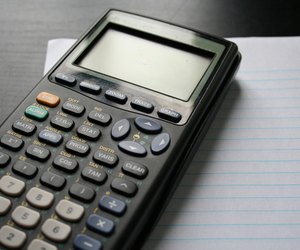 Before you jump into the cube root equation and perform the calculation on a TI-83, understanding the function of a cube is prudent. The cubed equation multiples a number to the third power or "n3." To do this, you multiply the number by itself two times. If your number is 5 cubed, you use 5x5x5 to reach the third power, which is 125, in this case. That means the cube root of 125 is 5. When you have a cube in geometry and want to find the volume of the cube, the same equation applies. All sides of the cube are identical and calculating n to the third power determines the volume.

To find the cube root on a TI-83 calculator, press the MATH key. This serves to begin an equation. Type the number you want to find the cube root for, followed by a colon, the third power symbol and the division symbol in that exact sequence. Press ENTER to generate the cubed root. If you simply wanted to cube the original number, skip the final division symbol to cube the number. You can perform the same function to any power. This includes finding the number squared or the square root. Simply replace the number three with a different power to find the desired result.

One alternative method exists for finding the cubed root. To cube a number, you can use a shortcut by pressing the ^ symbol followed by 3 and then press Enter. To find the cube root, you press the ^ symbol followed by an opening parenthesis, the number 1, a division sign, the number 3, a closing parenthesis and the Enter key to trigger the answer. The resulting number is the cube root. This method is quick and easy, and like the previous method, you can substitute any other power for the three. The number three is specific to a cubed equation, but any power works in the shortcut if you are seeking a square or other result.

How to Type to the Fourth Power Symbol

Around The Home
Productivity
By: Shawn Radcliffe

How to Use Exponents in C++

Around The Home
Productivity
By: Marty Simmons

How to Find the Cubed Root on an iPhone Calculator

What Does RMS Stand for in Speakers?