Mixing songs in any audio editing software is a matter of taking your ingredients -- the individual tracks of music -- and blending them in perfect proportions to end up with a tasty final project. It's not quite as easy as pie, however, since there's no master recipe to follow, and Audacity's open platform isn't meant to replace powerful commercial applications. However, it does support the ability to balance levels between tracks, and add equalization, compression and other effects commonly used in the mixing process, before finally combining all tracks into a single stereo track for exporting into a playable digital song format. 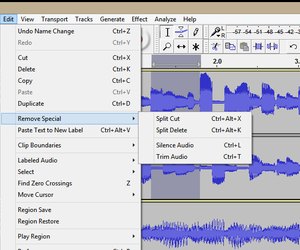 Delete or mute sections not needed in the final mix. For example, you can use Audacity's selection and editing tools to trim the start and end of files, as well as to delete quiet or unwanted sections. Background noise can add up over several tracks, so this is a good housekeeping practice to assure best quality for your project. Access Audacity's editing tools by selecting a section of audio, clicking Edit on the menu bar and selecting the appropriate edit. Clicking Remove Special accesses the most powerful editing options. These include:

Equalization, compression and reverb are each used to fit parts together in a mix, either by blending, or by separating tracks within the final mix. Tuning and embellishment isn't limited to these three effects, either. Audacity includes over 40 effects for use with your tracks. Though there's no standard way to approach this stage of mixing, recording technology magazine Sound On Sound suggests a four-part sequence when approaching a mix:

Keep in mind that this order is a starting point. You don't need to use all or even any of the steps. Your ears should be the final authority. 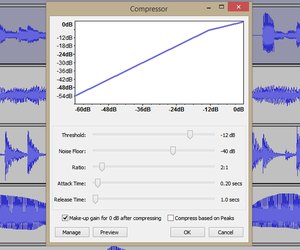 Assuming you have adjusted the volume of each track to create a rough mix, the first round of adjustments may address dynamics -- how loud or soft each track is, as well as loudness changes within it -- and smoothing out important tracks. For example, a singer may have a volume range that overwhelms the music in some places and can't be heard in others. Dynamics processors cut, boost and generally tame dynamics so that important content can be heard. In Audacity, access these effects by clicking Effects, and then selecting the desired effect from the drop-down list. Dynamics effects include: 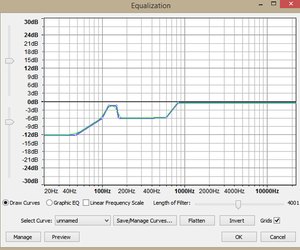 Balancing sounds across the frequency spectrum from low to high is an important part of a successful mix. In particular, midrange frequencies tend to build up, as many voices and instruments have content in this range, and without adjustment, a mix can take on a "cardboard box" sound when tracks are added. Look to Audacity's EQ effects to remove frequencies from each track that are covered by other instruments and not needed in the final mix. 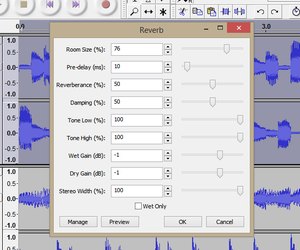 The sound of a great concert hall comes from the way sounds bounce around within it, imparting a sense of space. That's usually called reverb, a series of echoes packed closely together. Reverb effects give a sense of space to both individual tracks and complete mixes. Audacity includes several time-based effects that can give your mix a feeling of depth. 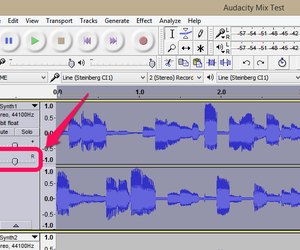 Panning takes place on each track within your Audacity mix project. By default, Audacity creates a stereo mix, which means any sound can be moved between extreme left and right, using this slider. Low frequency sounds, such as electric basses and bass drums, are usually center-panned, since low frequency information isn't very directional anyway, and lead vocals are often panned to the middle too, for prominence and clarity. You can "make room" for vocals by moving instruments with lots of middle frequencies to the left or right. It's common to place instruments from side-to-side as you would expect on a stage, but as with everything in mixing, there are no rules.

Once your tracks sound the way you want, you have two ways to create a copy of your mix.

How to Make a Tinny Voice Sound Fuller in Audacity

Around The Home
Productivity
By: Brad Cheng

Difference Between Echo and Reverberation

Around The Home
Entertainment
By: John Patten

How to Put Two Tracks Together With Audacity

How to Create a Sound Clip With Windows Media Player

Around The Home
Productivity
By: Shanika Chapman