Removing vocals from recorded songs depends on two bits of nifty science -- the properties of stereo sound and phase cancellation of contrary sound waves. Don't worry, there's no need for an engineering degree on your part since open-source sound editor Audacity takes care of the details.

However, the conditions required to completely remove vocals are exact, and any deviation may leave some of the vocal behind. Audacity's Vocal Reduction and Isolation and legacy Vocal Remover effects provide a good set of tools to accomplish the tasks.

There is no universal, reliable way of removing vocals without access to the original multi-track recordings.

Different tracks require different techniques to achieve maximum possible attenuation or isolation. This depends on where the vocals are positioned in the stereo field, and on their frequency content compared to the rest of the audio. -- the Audacity manual, "Tutorial - Vocal Removal and Isolation."

As you listen to a stereo recording, particularly through a set of headphones, you hear sounds that stretch from ear-to-ear, not simply on the left or right, where the speakers actually are. Your brain processes sound arriving at each ear using both volume and time differences. If a sound is louder in your right ear, and arrives before the signal reaches your left ear, you perceive that sound as being on the right. When a sound arrives at both ears at the same time and same volume, you perceive it as in front of you. This is the principle of binaural hearing.

Sound travels in waves, alternating between peaks and troughs. When two waves arrive at the same point, what happens depends on both the similarities and differences between the waves. That sound that arrived at both your ears at the same time and volume is reinforced if the waves are in the same phase. That is, when the sound was created, it produced a vibration that first produced positive pressure, then reversed and made a negative pressure. Picture a sine wave going up and then down, and you have the idea. That center signal from two headphone speakers are in phase.

Because polarity of an electrical signal feeding audio to headphones, in our example, can be changed, so can the phase relationship of the sound. For instance, reversing wires on the left side of the headphones makes the speaker pull back, then push forward, while the right side pushes forward and then pulls back. Everything else is the same. The volume remains constant, and the sounds arrive at the same time. The energy of those two waves, however, cancel each other.

By convention, vocals for contemporary recordings are often mixed in the center of a stereo image, the perceived field of sound between left and right channels. Also called center-panned, it means the vocal has an identical signal on both the left and right sides of a mix. Other instruments are spread across the stereo image from one side to the other. When the phase of one audio channel is inverted, all common sounds of equal volume occurring at the same instant will cancel. That center-panned vocal disappears.

Click File on the menu bar then select Import from the drop-down menu. Click Audio, select the appropriate file and then click Open. Select Make a copy of the files before editing (safer) from the warning screen, if you are using an uncompressed audio file. A supported compressed format, such as an MP3, will load upon selection. 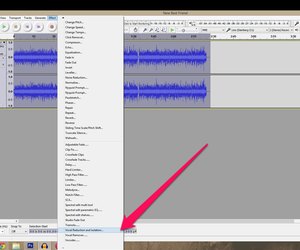 Click Effect on the menu bar and scroll down to click Vocal Reduction and Isolation. The effect window opens. 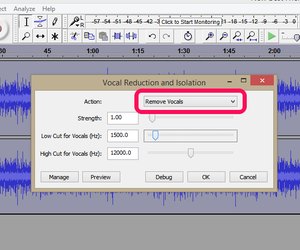 Select Remove Vocals from the Action drop-down, if it is not already selected.

Three settings can be adjusted to improve your results.

Click OK to start processing the song. When the effect is done, play back the song and evaluate the result. If the vocal is not removed or if the sound of the remaining tracks is affected too much, click Edit on the menu bar and select Undo Vocal Reduction and Isolation. Adjust the effect parameters to correct the problems.

Repeat the process until you are happy with the result. 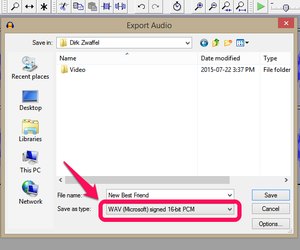 Click File from the menu bar and click Export Audio. Choose a folder, file name and format. Songs saved in Audacity format can play only within Audacity.

What Happens If I Reverse My Speaker Wires?

Around The Home
Entertainment
By: Ben Firke

How to Make a Tinny Voice Sound Fuller in Audacity

Around The Home
Productivity
By: Brad Cheng

How to Extract Only Background Music from a Song

How to Reduce MP3 File Size in Audacity