How to Program Magnavox TV Remote Control to TV

The Magnavox universal remote controls your television, cable box, VCR, DVD and other auxiliary devices. Programming a Magnavox TV remote is easy, and you can connect to your television in seconds. The result is a highly functional, easy-to-operate TV and entertainment system. 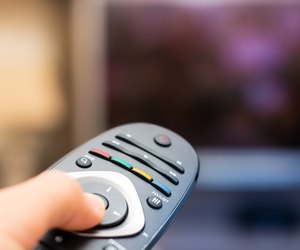 Set Up Your System

Before programming your remote, run through everything on your system to ensure it functions properly without the remote. This eliminates the television and associated components as being problematic if the remote fails to work properly. Test the television and the controls located on the TV.

After confirming the television is working normally, test your DVD player, sound system and any auxiliary devices that are hooked up to the television. While programming the remote to work with your TV, you should also program it to work with every other connected device. This way, you can control everything from one convenient remote control.

Double-check your system and then turn everything off before moving forward to the remote programming phase.

Check the remote for batteries and install new batteries if needed. Use a fresh set of batteries to ensure the remote has power and the signal strength to connect with the devices. Next, turn on the television only. On the remote, press the power button and the SEL buttons at the same time and hold them for several seconds to light the button.

The lit button means the remote is activated and ready to program the television. Point the remote at the television and enter the code for the TV. Every television comes with a specific code that is needed to connect an outside remote control. After entering your code, press the button labeled TV to store the code.

Now the television and the remote are connected. Change the channel or volume to test the connection. If the functions work properly, your code was correct. If the remote does not work, repeat the process and double-check your television code. Using the proper code, it should take only a few seconds to program the television for the remote connection. If you do not know the code, look up TV codes for universal remotes online to locate the code for your model.

Obtain the program codes for each of your other connected devices and repeat the same process while using the appropriate button to make the connection. For example, while connecting a VCR, hold the power and SEL buttons to obtain the light, but this time, choose the VCR button after entering the code to program the VCR.

The Magnavox universal remote control is becoming dated as connected televisions are hooked up to the internet and paired with apps for streaming services. Rather than a VCR button, new remotes have buttons for Netflix and App managers.

In some cases, you can load a remote control app to your smartphone and control your devices directly from the phone. This transforms your phone into a remote control, eliminating the need for a universal remote unless you want to allow other people to access your system. If you have an older television, continue to use the Magnavox remote until you are ready to upgrade to a smart system for streaming and cable.

Around The Home
Entertainment
By: Pamela Gardapee

How to Troubleshoot a Toshiba HDTV That Will Not Turn On

Around The Home
Entertainment
By: Nina Nixon

How to Reset TV Remotes

How Do I Program My Sylvania Television Into a Dish Network Remote?

How to Fix a Panasonic TV That Won't Turn On