How to Reset an HP Inkjet Cartridge

One common complaint you'll hear about printers is that it's almost cheaper to replace the printer than to buy ink for it. That's usually not quite true, except for very low-cost printers, but ink is definitely a major expense. Refilling cartridges is much more economical, and it's a way around the notorious HP printer tricolor cartridge problem. Basically, if you run out of one color you sometimes can't even print black until the color cartridge is replaced. But HP, like other brands, often won't recognize the refill. Until you find a workaround to reset it, your printer will still report the cartridge as being empty. 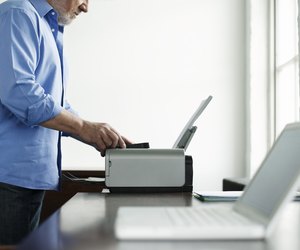 Your printer software doesn't really keep track of how much ink is in your cartridge. If your HP Deskjet 940c reports a low ink level, for example, it's not because there's an elaborate sensor monitoring how much is left. Instead, the printer has a small area of memory that keeps track of a unique identifier for each cartridge. It knows from the cartridge type how many pages it's supposed to handle and keeps track of how many pages have been printed from that cartridge.

If you fill the cartridge with new ink, your printer still thinks it's empty because of the number of pages printed. Your task is to make your printer forget that specific cartridge. If you do that, you reset the HP ink cartridge page counter.

If you're the kind of person who keeps a bag of used cartridges on hand and takes them periodically to the recycler, you can think of this technique as your reward.

Some models are capable of tracking up to five sets of cartridge identifiers in their memory, allowing another technique. In this case, you'll simply remove your cartridges, shut off your printer and turn it on again for at least 20 seconds.

This replaces the cartridge information in one of those memories with a blank. Now repeat the process an additional four times, and your printer's memory should be empty. When you return your refilled cartridges to the printer, it should have forgotten the page count, recognizing them as new.

A third method uses tape to stymie the printer when it tries to ID the cartridge. You'll place small pieces of tape over specific contacts on the print cartridge, start the printer, then take the cartridge out and move the tape to a second location. This technique is trickier because different cartridges require you to cover different contacts, and the sequence can change.

The company that refills your cartridges might have this information on its website or provide it by telephone, or you can do an internet search to find the specific instructions for your cartridge. Bear in mind that you might need to clean the cartridge with alcohol when you're done to remove any lingering adhesive.

Instead of relying on the printer to store page counts, late-model HP printers often have a chip right on the cartridge for this. Those are a bit trickier. Depending on the age of your printer's software, it might simply give you the option of overriding the driver and telling it to treat it as new. That's a change the company made in response to legal pressure from unhappy customers.

Otherwise, you'll need to pop off the factory chip with a small screwdriver, or similar tool, and replace it with a third-party "auto reset chip," or ARC. Those are available with or without ink level monitoring, and they'll let you use your refilled cartridges without a fuss.

The obstacles HP puts in your way aren't entirely a cash grab. Third-party cartridges won't always match HP's for quality and can give poor results. Refilling authentic HP cartridges can be a better option, but they're intended for single use. You can usually refill one several times before it starts to deteriorate, but it's a good idea to record each refill and replace them after a few fills. Plus, HP print drivers are optimized for HP ink; using aftermarket inks might give you strange and erratic color changes.

How to Reset Printer Ink Cartridges

Around The Home
Productivity
By: Pat Smith

How to Reset a Laser Toner Chip

How to Disable the Low Ink Warning on Canon Printers

Around The Home
Productivity
By: Amanda Kondolojy

How to Open a Canon MP620 to Replace the Ink

How to Make Your Own Epson Chip Resetter