How to Test the Stability of Your Internet

The Internet is a complicated, multi-faceted group of connections with many points of failure. Testing your own connection means gathering enough data to pinpoint where, if at all, your connection fails. Many times, an unstable connection has more to do with local equipment than the Internet connection itself. 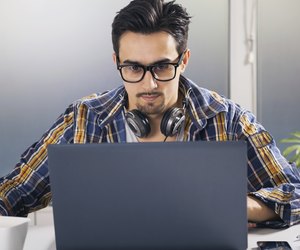 How to Set It All Up

To test your Internet stability, you'll need a computer on your network capable of issuing a "ping" command and receiving a response. Place the computer outside of your firewall or turn off any software firewalls that may be installed. It's also best to test your Internet through a cable connection and not Wi-Fi. Use the addresses of at least two servers on the Internet that accept pings -- and that are unlikely to fail. IP addresses are preferred over URLs. Two good options are the OpenDNS project servers (link in Resources) and a government-run Network Time Protocol server (link in Resources). Finally, record your results using a spreadsheet program, such as Google's spreadsheet app or Microsoft's Excel.

Pings are issued using the command-line interface, which is available on virtually all operating systems. Pinging simply sends a data packet to a remote computer, asking that computer to respond. If it responds, it records information about that response for your to review. You'll open a command window for each address you plan to ping, and then issue the following command (without quotes): "ping [server address]". Run this command at least two or three times in a row, each time. Perform these groups of pings multiple times a day for at least a week.

What to Do With Your Pings

After each ping command finishes, you'll receive summary information that includes how many packets were sent, how many were received, the percentage of packets lost, and the time it took, on average, for the responses to return. Document these pieces of information, making sure to note the date and time you ran the pings. Once you have one or two weeks worth of data, look at the readings. The stability of your Internet is going to be measured by how little the ping results to a specific server vary over time. Using a spreadsheet, measure the standard deviation of the average ping response times. The lower the standard deviation, the more stable the Internet connection. High packet loss is also a sign of an unstable connection. Keep in mind that both addresses have to experience similar results in order to suggest that your Internet is unstable. If you find that your two IP addresses have wildly different standard deviations, then attempt the test again with new IP addresses.

If your results are slow, or vary wildly across the board, first unplug and re-plug in your modem. This reset sometimes stabilizes the connection. If you find yourself resetting the connection frequently, contact your ISP. Allow them to walk you through their troubleshooting process. This will include resetting your modem and running ping commands. If they don't see a problem from their end, ask them to have a technician check the cables. Unstable Internet connections may have a culprit in bad, frayed, or water-logged wires.

How to Check for Internet Interruptions

Around The Home
Productivity
By: John Lister

How to Ping a Static IP Address

Around The Home
Productivity
By: Mike Benson

How to Check How Many Mbps You Have

Around The Home
Productivity
By: Marie Clay

How to Set a Default Gateway in Windows