How to Unlock a Computer Keyboard

Whether your computer keyboard fails to respond to attempts to turn off security provisions, or simply ignores key presses when you try to type or enter commands, the results stymie your attempts to use the system. These symptoms can point to actual malfunctions, or to system settings that can simulate a problem if they become active unexpectedly. To regain access to your computer, eliminate the possible causes of its cold shoulder until you find the culprit. 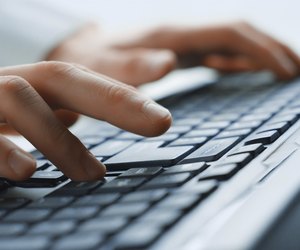 If you use a computer in a busy office or other shared working environment, you probably add password protection so the keyboard locks when you walk away from the system. Entering your user name and password should unlock the security provisions and give you access to your work. If entering your login information produces an error message, verify that the "Caps Lock" key hasn't activated accidentally, changing the password you type so it doesn't match the security settings you stored.

Microsoft Windows includes special features to simplify computer use for persons with disabilities. Among its accessibility options, Filter Keys disregards what Windows considers to be accidental keystrokes, including multiple quick taps on the same key, or sustained pressure on one or more keys. If you share your computer with someone who relies on these accessibility features, you may need to turn them off temporarily while you work and reactivate them before the other user needs to use the system. Click on the "Ease of Access" button on the Windows login screen to reach the accessibility settings, including the "Keyboard" option through which you can turn off Filter Keys, or press "Windows-U" after you log in.

Desktop computer keyboards can fail from a multitude of forms of misuse. Beverage spills, built-up dust and dirt under the keys or paper clips that fall between them, worn-out switches: all these and more stresses, strains and foreign objects can lead to keys that either ignore input or overreact to it. To rule out your keyboard itself as the cause of its failure to allow you to log in to your operating system, unplug the device from its USB cable and substitute a keyboard from a computer that operates normally. For wireless input devices, check for bad batteries or interference from other devices, including cordless phones. On a laptop computer, try plugging a keyboard into one of the system's USB ports.

Most desktop computer keyboards use detachable cables that plug in to the CPU at one end and a built-in USB port on the other. If replacing your keyboard doesn't solve your problem, remove the cable and replace it with one from a working system. Because cables don't constitute moving parts, they often escape scrutiny when device problems crop up, but they can sustain damage and fail like any other component. Along with cable failure, rule out the possibility that the cable partially pulls out of the USB port and no longer makes a viable data connection.

My Keyboard Is Stuck on All Caps

How to Lock a Keyboard

How to Fix a Keyboard Error

Around The Home
Productivity
By: Jason Candanedo

How to Troubleshoot Keyboard Typing Lag

How to Disable the Touchpad in BIOS

Around The Home
Productivity
By: Paul Molina

How to Test a Laptop Keyboard