I Can't Connect My Samsung Blu-ray to the Internet

Blu-ray players are one of the many devices that bring Internet to your home entertainment center. With the right Blu-ray player you can stream video from services like Netflix and Hulu, access applications for Twitter and Facebook and even player media from your home computer. Samsung has 18 different models of Blu-ray player, each with features and specifications unique to its design. The biggest difference in Internet connection type is whether your player requires a wired connection, or can connect wirelessly to your network. 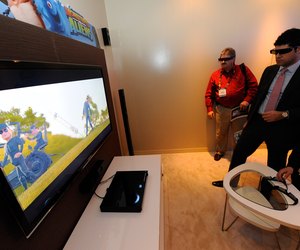 Samsung Blu-ray players do not support WEP passwords that are 26 characters. If you're currently using a 26 character password for your WEP network, you have a handful of options. The simplest is the change the WEP password to the 10 digit code. You can also change your router security to WPA, which is more secure than WEP and fully supported on Samsung's Blu-ray players. Make sure to change the password on your wireless devices.

If you're using MAC Address Filtering on your home network, you will need to add your Blu-ray player's MAC address to your whitelist. How you do this depends on your particular model of wireless router; on Linksys routers this feature is available a "Wireless MAC Filtering" under the Wireless menu. When you run the network test on your Blu-ray player, the MAC address displays in parenthesis beside the title "MAC Address."

How to Find the MAC Address on a MacBook Pro

How Do I Block Websites on My Wireless Modem?

Sony Blu Ray Player Does Not Connect to Internet With Ethernet

Around The Home
Entertainment
By: Kefa Olang

How to Reset a Netgear Modem

Around The Home
Productivity
By: Kiley Mitchell