If Your iPhone Is on Airplane Mode, Will Your Alarm Go Off?

The original aim of airplane mode was to turn off features in mobile devices that might interfere with aircraft functions. Putting an iPhone in airplane mode basically disables its networking and wireless services but leaves others active, including the phone alarm. Turning your data connections off in this way can also be useful in other situations and can reduce battery drain. 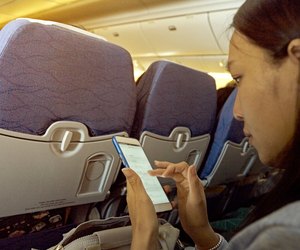 What Is Airplane Mode?

The iPhone may interfere with an airplane's communications systems unless you switch it to airplane mode. This shuts down its ability to work as a phone by disabling wireless data signals. Apple uses this feature to disable voice and data cellular services, Wi-Fi, Bluetooth, GPS and other location functions. You won't be able to make or receive calls, texts and emails or use the Internet. Other functions still work.

Will My Alarm Work in Airplane Mode?

The iPhone has a built-in alarm function that isn't affected by airplane mode. The phone alarm doesn't need a wireless or networking function to work; it's part of the phone's internal time system. Also, airplane mode doesn't turn off sounds on the iPhone, but it shuts down push-pull data notifications. So, if you set a phone, alarm, it will go off, and you should hear it even in this mode.

There are other benefits to using airplane mode. It's a useful way of speeding up a charge and cutting down on battery drain. The functions that are disabled in this mode use up a lot of power and your battery will last longer if it's enabled. Airplane mode is also useful if you use the iPhone as an alarm clock and don't want to be woken during the night by incoming calls, texts, emails or other data notifications. They're disabled but your alarm will still go off.

The iPhone alarm function is fairly robust even when other features are disabled. It should, for example, still play a sound when it goes off even if you have switched to silent mode. If you're traveling, however, don't assume that the alarm will go off at the right time. Some carriers don't support local time updates so you may need to set the time manually if you move between time zones.

How to Find Out What Is Draining Your iPhone Battery

How to Stop My iPhone From Turning on Bluetooth by Itself

How to Track Your Sleep Using iPhone's Bedtime Mode

Around The Home
Entertainment
By: David Weinberg

If Your iPhone Is on Silent, Can You Still Hear Your Alarm?

Around The Home
Entertainment
By: John Granby

What Does Airplane Mode Mean?

Around The Home
Entertainment
By: Scott Knickelbine