The development of machines able to mimic human thought, surpass it, or even become self-aware is a well explored premise within science fiction. In today's technological landscape, the advent of artificial intelligence -- AI -- may become one of mankind's greatest achievements, but as renowned physicist Stephen Hawking warned, "it might also be the last, unless we learn to avoid the risks." 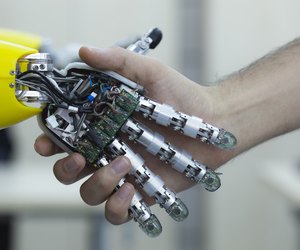 Increased Automation: Who Pulls the Trigger?

Sophisticated technology continues to embed itself in modern society, from digital personal assistants and smart-search algorithms in Google, to experimental self-driving cars. Artificial intelligence is defined as a computer or machine being able to perform "logical deduction and inference," and "make decisions based on past experience or insufficient or conflicting information." Current tech levels already pose frightening ethical dilemmas, such as whether military drones or other robotic systems should be designed to use lethal force against targets without direct human involvement. Presently, programmed machines can react with greater speed and accuracy than a human operator, but are still capable of gross error without human biases and intuition to guide decision making. These issues will be intensified if AI is built into such systems, introducing independent motives that may be completely unpredictable or in direct conflict with human intentions.

Incorporation of artificial intelligence will drastically shift humankind's concept of work. Since the Industrial Age, technology of any kind inevitably renders many jobs obsolete while creating new opportunities in emerging fields. AI offers a future in which machines do tasks in our stead, allowing people to pursue lives of leisure. Economist John Maynard Keynes went so far -- back in 1930 -- as to predict a work week of 15 hours by 2030. At current population levels, all aspects of society would require a drastic re-envisioning both culturally and economically if automation created such a dramatic shift in how our days are spent.

One significant threat of artificial intelligence is whether it chooses to use already enhanced abilities to create machines of even greater cognitive power. Advanced generations of AI could operate as high above human beings as we do above animals, and even quite possibly evolve beyond the human ability to understand it. In this outcome -- referred to as the Singularity by Dr. Vernor Vinge for the NASA Lewis Research Center's VISION-21 Symposium in 1993 -- the rules to life as we know it would change forever, for there is no way to predict if AI would decide to coexist or be hostile toward humankind.

Hawking stresses that any serious discussion of artificial intelligence must take into consideration the potential threats and how to manage them, and calls for more critical, institutional research as increasing corporate resources are devoted to realizing breakthroughs in creating artificial intelligence. Vinge postulates that AI can be tightly regulated by rules that effectively hard-wire benevolent behavior into autonomous robots, as imagined by science fiction writer Isaac Asimov's Three Laws of Robotics. Vinge also warns that natural human competition will likely lead to the development of unrestricted models of AI, so even such safeguards may not be enough to control the Singularity if it occurs.

What Can Robots Do That Humans Can't

What is the Difference Between a Robot and a Machine?

Around The Home
Productivity
By: Frank Luger

What Kind of Jobs Do Robots Do?