The Pew Research Center reports that in 2014, 90 percent of American adults own a cell phone and 64 percent own a smartphone. With such high ownership, having a cell phone is often assumed, leaving those who don't own one struggling to stay in touch with the office or family while out of the house. Having a phone in your pocket isn't necessarily the best choice for mental health, however: Psychology Today estimates that 40 percent of the population suffers from a fear of being without a phone, leading to symptoms including panic and feeling sick.

From staying on-call with the office to calling home from the grocery store, owning a cell phone provides convenience. Regardless of whether your job or home life requires you to stay in contact, a cell phone improves your accessibility, especially as payphones become harder and harder to . Many phones, especially smartphones, also provide convenience with utilities such as calculators, maps and reference materials. 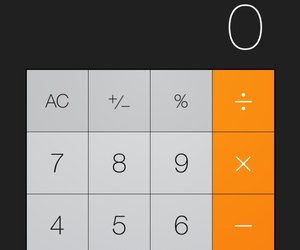 All smartphones and many feature phones have built-in calculators.
credit: Image courtesy of Apple

On the other hand, the convenience of cell phones leads to their use even when another option -- or simply staying off of devices entirely -- would work better. People make calls on cell phones even while near a landline, leading to dropped calls and poor reception. Smartphone owners browse the Web and work using mobile apps even when a computer could get the same job done faster and with less struggle. People also use their phones at inappropriate times, such as at the movies or a restaurant, causing disruption for others. If you want a cell phone for its convenience, remember that it's a tool like any other: better for some jobs than others.

Having a cell phone provides a link to the world from almost anywhere. Out on a deserted highway, a cell phone can usually make an emergency call in case of a car crash. Even if you cancel your cell phone service, an old phone can still call 911, providing peace of mind and access to help after a disaster.

Cell phones also pose a safety risk when used in a car. According to the CDC, 31 percent of adult drivers under 64 have sent or received texts or emails while driving within the last 30 days, leading to hands off of wheels and eyes off of roads. Talking on the phone while driving isn't safe either. Even when using a hands-free system -- a legal requirement in several states -- drivers miss up to half of what they see out the windshield while talking on a cell phone, according to the National Safety Council.

Some people worry about health risks, such as brain cancer, from long-term cell use. Scientists continue to investigate the issue, but as of publication, the , which uses a much weaker wireless signal than the phone itself.

Another growing health concern is the public's emotional reliance on cell phones, leading to distress and even physical symptoms when one's phone dies or is lost. A recent study found that people performed worse on a test and suffered from elevated heart rate and blood pressure after being separated from their phones. So if you do choose to get a phone, keep it in perspective: The phone's there to help you, not to take over your life.

What Are the Positive & Negative Aspects of Cell Phones?

Around The Home
Entertainment
By: Eric Dontigney

How to Dry Out a Phone in the Oven

Around The Home
Entertainment
By: Greg Stone