Electronic communication dates back to the telegraph that used Morse code to send messages long distances over wires. After that, the electronics industry added the wired telephone, the wireless radio and television. Since then, the industry has exploded; consumers now share information with each other anywhere, anytime and in ways that are as varied as we are. 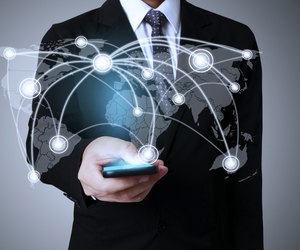 World Wide Web users post content on websites for others to view. The content may be simple text, but it might also contain multimedia files including images, sounds, videos or streaming content. Unlike many other forms of electronic communication, most Web content is pulled from the Web by users who are seeking information, rather than pushed to subscribers. While not as permanent as traditional media like paper, Web pages can archive information for extended periods.

Email is a method originally intended to imitate physical mail. Messages are delivered from one specific address to one or more specific addresses. Users are alerted to the presence of new messages in their inboxes by email clients that display the content and offer an opportunity to reply. Messages are primarily text but may include file attachments of various types including images and short movies. Unlike instant messages, emails are generally not expected to be read immediately upon receipt. Most email readers keep track of conversations that include multiple people through the use of threads. Thus email is ideally suited for long, involved conversations between two people or among small groups of people.

Conversations that go on indefinitely, involve large numbers of people or need to be archived are not well suited to email. Forums, often hosted on the Web, provide an alternative that combines many of the aspects of email and Web pages. They involve discussions around a single, limited topic but can take place over months or years and involve dozens or even hundreds of participants. Most use a treelike structure that allows participants to jump in at whatever level their comments are most appropriate.

Text messaging uses cellular airwaves and protocols to deliver textual messages from one cellular phone to another or from one phone to a group of other phones. Text messaging is usually intended as near-instant communication and can be quicker than a phone call because the sender doesn't have to wait for the recipiant to answer before delivering a message. Because text messaging is informal and easy, it's sometimes called chatting. Text messaging can also facilitate private discussions when there is a chance that a phone call could be overheard. Instant messaging is similar to text messaging but is carried over the Internet rather than over cell phone airwaves.

Social networking sites facilitate communication among people with common interests or affiliations. Sites such as Facebook and LinkedIn provide places for people to interact, sometimes in real time. Microblogging services like Twitter, allow short textual messages of no more than 140 characters to be broadcast to a large audience. Unlike text messages, which are delivered to only small groups, microblog posts are intended to be seen by all of a user's followers. Microblog users can repost messages that they want to share with their own followers, so a microblog post can spread quickly. A widely reposted message is called a viral post.

Like instant messaging, most video chatting is conducted over Internet protocols that stream images from one device to another. At times, nothing beats a face-to-face conversation. Video chats provide an immediacy to a conversation. Because a person's tone is often easier to read when you can see his face, businesses often use videoconferencing to aid in virtual meetings.

What Is a Cyber Community?

Around The Home
Productivity
By: Laura Latzko

The Importance of Computers in Communication

Around The Home
Productivity
By: Josh Victor

How to Text a Virgin Mobile Phone From the Internet

Around The Home
Entertainment
By: Stephen Ip

What Is the Purpose of Hypertext Transfer Protocol?