Understanding each other is a constant human struggle and a constant human joy. While people have traditionally expressed themselves in written and oral long form through books, handwritten letters and phone calls, the advent of the text message truncated the written word and potentially truncated the ability to understand the intentions, desires and feelings of the writer. To effectively convey your emotions when texting, feel free to use common methods of expression -- such as emoticons -- but don't fear expanding the bounds of the medium. 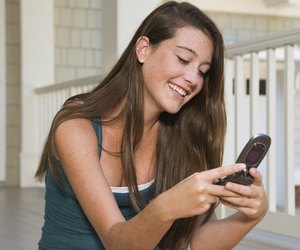 A girl is texting on a cellphone.
credit: Comstock Images/Stockbyte/Getty Images

Emoticons, those expressive little cartoon faces, are perhaps the most obvious technique for conveying emotion in texts and for good reason. Because emoticons mimic the expressions of the human face, they serve as simple shorthand for conveying an emotional state without directly stating it. Communication professor T. Andrew Finn of George Mason University notes that emoticons convey difficult-to-text subtleties such as sarcasm and humor clearly, can save time, lighten the mood and "make a dramatic difference in how [the text] is perceived." Finn warns of overusing emoticons, as they can lose their impact over time or come across as unprofessional in a business setting. Similarly, emoji -- which expand emoticons into the realm of animals, food and objects -- and stickers, memes and animated GIFs can quickly convey lighthearted emotions.

Speed and efficiency are key to the appeal of text messaging. You don't have to write novels to convey emotions; lengthening your texts just a bit can clarify your feelings. As clinical psychologist and marriage counselor, Randi Gunther points out in an article for Psychology Today that abbreviated texts not only come across as curt, they leave themselves open to interpretation which -- especially in the case of relationships -- often results in messy communication. Although abbreviation is the norm in texting, completely spelling out particularly important messages shows people you've taken time, which indicates caring. For example, "I read about your uncle's passing on Facebook and am sorry for your loss" likely has more emotional impact than "read abt yr uncle's passing on FB, sry 4 yr loss."

Using punctuation can also clarify the emotional content of your texts. An informal study published by New Republic in 2013 found that recipients often interpret texted sentences with periods at the end as bold, assertive or aggressive. On the same note, texters find sentences with no period or with ellipses more passive or open ended, while the exclamation point serves not only as a marker of emphasis but as one of sincerity.

Focus on the Positive

According to a 2013 study by marriage and family therapist Lori Schade, texts convey positive emotional communication far more effectively than negative communication. In a study of men and women between the ages of 18 and 25, respondents found that affectionate texts enhanced the quality of their relationships, but texts that made decisions, attempted to resolve disputes or made apologies were interpreted as detached and contributed to a less stable view of the relationship. Senders of negative texts don't witness the effects of their words on the recipients, leading to further detachment. With this in mind, rely on texting for positive emotional communications and reserve in-person time for touchier subjects, when possible.

How to Send a Formal Text

Around The Home
Entertainment
By: Pilar Ethridge

How to Make a Text Hug Emoticon

Around The Home
Entertainment
By: Marlon Trotsky

The Positive and Negative Effects of Social Networking