10 Ways to Communicate Using the Internet

The internet is fundamentally a communications tool, and since its creation decades ago, people have been using it to communicate with one another. Early ways to communicate online on the internet that still exist include email, Usenet newsgroups, internet relay chat and other chatroom services. More recently, the internet has developed the web, social networking tools, instant messaging programs, videoconferencing tools, newer chat programs and internet phone calling. 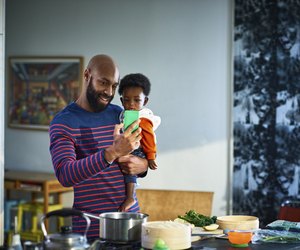 The internet as we know it today evolved from a 1960s research project called Arpanet, named for the Defense Advanced Research Projects Agency, an arm of the Pentagon that funds basic scientific research and development. The agency realized that the computers that were increasingly popping up in offices, universities and military bases across the world would be more useful if they could send data to each other over long distances.

By the early 1970s, people had already begun to send email between computers far apart from one another, ushering in an era of connecting and communicating online. By the 1980s, the transmission control protocol, or TCP, one of the core protocols used in internet communication, had been developed, and Usenet, the worldwide network of message boards, had been created.

Top-level domain names such as .com for commercial entities, .edu for educational institutions like universities, .org for nonprofit groups and .mil for military installations began to be widely used to divide up the types of groups on the internet.

In the early 1990s, Tim Berners-Lee, a researcher at the European Organization for Nuclear Research (CERN) developed the hypertext markup language used to build web pages. Web browsers soon became available for operating systems at the time, including Microsoft's Windows 95. Chat programs, such as Yahoo Messenger and AOL Instant Messenger, also became popular in the 1990s. Email became widespread, with people receiving addresses from their internet service providers or employers and, soon, from free services such as Yahoo Mail, Microsoft's Hotmail and Google's Gmail.

There's some controversy about who actually invented networked email, but there's no doubt that messages were being sent from computer to computer early on in internet history. Since then, various rules of etiquette have evolved around email use. While email can be more terse and use more abbreviations than print correspondence, it's still generally a good idea to attempt to use clear spelling and grammar and to be polite, especially since it's impossible to hear someone's tone of voice when you're sending email.

Email has been used as a means for spreading malware as well as for scams known as phishing, where someone impersonates a trusted sender in order to trick the recipient into sharing passwords, account numbers or other sensitive data. As a result, it's important to be cautious when receiving email with unexpected attachments, which could be viruses, or requests for funds or information, which could be scams. If you're not sure an email is legitimate, contact the person who allegedly sent it using another means, like the telephone.

Dating back to the 1980s, internet relay chat was one of the earliest chat tools on the internet. It's still in use today for recreational purposes, coordinating work teams and handling tech support for some open-source software products.

Using networks of internet servers and specialized client software, IRC let anyone set up chat rooms, or "channels," devoted to topics of their choice. It influenced subsequent chat systems such as AOL and Yahoo chat and even contributed the convention of using the "@" symbol before a username and the "#" symbol to denote a topic.

In the 1990s, computer-based instant messaging tools such as ICQ, AOL Instant Messenger, MSN Messenger and Yahoo Messenger became popular ways to stay in touch with people down the street or around the world for no cost beyond whatever users already paid to connect to the internet. Some of these tools developed cult followings among particular types of users, such as Yahoo Messenger's rise among oil traders.

Most of these early tools have since been retired by the companies that operated them, though a few, such as ICQ, live on with loyal fan bases.

Most of the 1990s chat tools have since been supplanted by a new breed of messaging tools, including Facebook Messenger, Google Hangouts, Apple Messages and simple cellphone-based text messaging. Many of these tools work on smart phones as well as desktop computers, or even on smart phones alone, and they contain more features than their earlier counterparts.

Workplace messaging tools, such as Slack and Microsoft Teams, have also become popular in many companies as a way to share information without picking up the phone or even drafting an email.

Many of today's internet users are familiar with the concept of online discussion forums, including Facebook groups, subreddits on the forum site Reddit or independent forums on special interest sites. These let people discuss the news of the day or details of their hobbies, medical conditions or hometowns. Many have moderators in place to keep the peace and repel trolls, fraudsters and other undesirable users.

As the old saying goes, don't believe everything you read. This is especially true when it comes to online message boards, where rumors and misinformation can spread quickly. It's also a good idea to hold your temper rather than get into fights, or flame wars, on these forums.

Before today's forum sites, there was Usenet. Usenet, which still exists in diminished form, is a set of distributed discussion groups focusing on anything from UFOs to football. In its heyday, users would connect to a Usenet server, often run by their ISP, and download the latest messages from the newsgroups they subscribed to using a specialized program called a newsreader. When they wanted to post messages, they would compose them in their newsreader, often while offline, then upload them when they next signed online.

Usenet also allowed for the direct distribution of large files, which has at times been used for piracy. Most modern forum sites limit uploads to small images.

The World Wide Web may have started as an experimental research project at CERN, but it's since become one of the dominant media of the world. Pretty much every major business, organization and government agency has a website, and many individuals do as well.

The web is perhaps the dominant form of internet communication, used for everything from shopping to checking the weather to accessing other ways to communicate online, such as email and digital message boards. Even many other services accessed through specialized desktop or smart phone apps still are ultimately based on the hypertext transfer protocol, the web's principle system for transferring information.

Users access the web through specialized programs called web browsers, including Microsoft Edge, Google Chrome, Mozilla Firefox and Apple Safari, which are available for computers and other devices such as smart phones, tablets and even video game systems. Websites are built using languages called HTML, which spells out the basic structure of a website; CSS, which specifies details of how its elements look on the screen; and JavaScript, which provides programming logic to process interactivity and process data.

For many people, the web is where they get their news, do their shopping, listen to music, watch TV and communicate with friends, displacing many media that existed in the past. Many people have migrated to the web from other media, changing the economics for TV networks, newspapers, phone companies and others. The web is still relatively young, and it's likely to continue to evolve in coming decades even as it remains one of the dominant communication tools in the world.

Some of the most popular internet communication tools are social networking services, including Facebook, Twitter, Facebook-owned Instagram, Snapchat and work-oriented LinkedIn. These services generally enable people to connect with and follow posts from a chosen group of associates, sharing updates about their lives, careers or musings throughout the day.

People frequently use social networking tools to stay in touch with remote friends and family and simply for entertainment. Some people follow updates from celebrities on social media, and the networks have changed how politicians and entertainers communicate with the public. Many people use them as a way to follow the news as well, following media organizations on Facebook or even individual journalists on Twitter. Social networking sites are generally free and supported by advertising.

Social networking tools have run into some controversy over the spread of rumors, fake news stories, hate speech and other undesirable content, and some network operators have taken steps to reduce such behavior.

Many people have switched to internet-based calling systems, using what's called Voice over Internet Protocol (VoIP), from traditional telephones, especially in office settings. VoIP systems can be cheaper and faster to set up than traditional phones, and they often allow international and long-distance calling for a fraction of the cost of landline telephones.

These systems are available through internet service providers, including many cable and traditional phone providers, as well as through independent providers that can use your existing internet connection.

Video calling has also become popular for staying in touch with friends or family and for work conference calls that, in the past, would have been audio-only. Adding video makes it possible to see people's facial expressions, which can lead to easier communication. Coworkers can also share presentations and files through video systems, making sure everyone is literally on the same page during a discussion. One downside, of course, is that people need a professional environment and attire for a call that, if audio-only, could be placed from anywhere and in any kind of dress.

Popular video chat systems include Microsoft's Skype, Google Hangouts and Apple FaceTime. Video chat facilities are also built into popular office messaging tools such as Slack. It's generally possible to video chat with any modern computer or smart phone equipped with a working camera. Many video chat programs enable people to have audio-only chats if they prefer.

The Future of Internet Communication

Nobody knows for certain what the future internet will look like, but it's unlikely that we're done innovating. Companies continue to experiment with new styles of internet-enabled tools, from virtual reality headsets to smart watches to smart speakers equipped with virtual assistants. Technologies that used to be separate from the internet, such as televisions, cellphones and video game consoles, have all gotten networked by default in recent years.

It's likely that some technologies like email and the basic web will persist, but it's quite possible that some of the social networking and chat systems will be replaced in the future, just as the current players replaced earlier such systems.

Uses of Email in Business

The History of Chat Rooms

Around The Home
Productivity
By: Faith Davies

Around The Home
Productivity
By: Brian Jung

Around The Home
Entertainment
By: Erica Starks