The Advantages of a CRT Monitor

CRT, short for Cathode Ray Tube, is a technology commonly used in television sets and computer monitors. While perhaps not as popular as they once were, CRT monitors still offer many advantages over their main competitors. While they're bigger and bulkier than LCD monitors, many feel that the advantages still outweigh those of LCD displays. 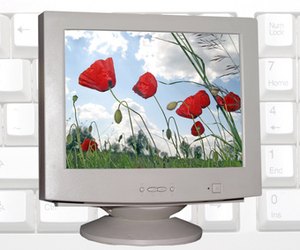 CRT monitors are typically bigger and bulkier than the competition.

You may notice with certain monitor and television types that the picture quality changes drastically depending on your angle to the picture. This problem is particularly prevalent in LCD displays but is virtually non-existent in CRT monitors. A CRT monitor will retain the same picture quality no matter what angle you look at it from, giving these monitors more flexibility when it comes to placement, distance and view angle.

Aside from the actual colors themselves, CRT monitors also have other qualities that give them a good image quality, overall. CRTs typically have high resolution, meaning a finer and more detailed picture. CRTs also feature dark blacks and high contrast levels, making them suitable to use in diverse lighting situations. Another key image quality advantage is the lack of motion blur. Motion blur occurs in some monitors when images on the screen change too quickly. For example, an action-packed and fast-paced video game would, on other monitors, be blurry during the faster parts, while CRT monitors show the game without the added blur, according to DisplayMate.com.

A Brief Word on LCD

While LCD picture quality is typically less than that of a CRT display, this is rapidly changing. LCD technology is advancing much quicker than CRT technology, meaning it's catching up to the CRT pictures quality. While these high-quality LCD monitors are costly and rare, as the technology advances they'll become cheaper and more readily available, meaning many of the CRT advantages will eventually be better on LCD screens.

How to Reset an LG LCD Monitor

How to Fix Auto Adjust on a Computer