The Toshiba Corporation has been making laptops since 1985, and they have made it a point to make them easy to use straight out of the box. If you have purchased a Toshiba laptop, you will be happy to know that it is simple to set up. After just a few steps, you will be surfing the Internet and playing games.

When you open the box containing your laptop, you will find the laptop and its components neatly wrapped in cellophane and tightly packed in packing foam to prevent them from shifting. Carefully remove the components from the box and their packaging. Along with the computer, you will find its power cord, probably in two sections: one section containing a bulky adapter connected to a long cord and the other being just a slim cord of approximately equal length. There may or may not be some CDs or DVDs in the box; modern Toshiba laptops tend to come with all of their software installed, and backup and recovery disks are made using the computer itself. 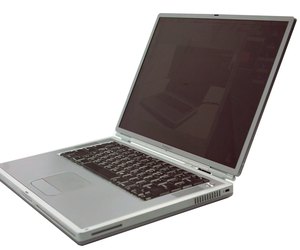 Open the screen by lifting the top flap. The laptop will open like a book lying on its side. There will likely be tape holding the laptop closed and clear stickers protecting the screen and certain keys. Remove all of these. You may see stickers containing the logos of Microsoft and the company that manufactured your processor. These are best left alone, as they are difficult to remove and will leave "sticker scars" behind.

Locate the laptop's power button--it will often be on the base of the laptop near the bottom of the screen. When you turn the power on, it might take quite a while for the computer to boot because this will be the first time the operating system is booting. As it boots, it may ask you to input the language you would like to use, the time zone you are in and the name you would like to give the computer. Supply the information, and wait until the laptop finishes booting. When it does, it may suggest that you make backup disks for the system. You can do this now or later. At this point, your Toshiba laptop should be ready to use.

How to Disassemble a Dell Desktop Computer

Around The Home
Productivity
By: Jesse Adams

How to Make a Laptop Battery Charger

Around The Home
Productivity
By: Derek Brown

How to Fix Busted Laptop Speakers

Where Is the Hard Drive Located on a Laptop?

How to Fix a Short Circuit on a Computer