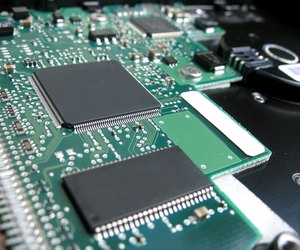 Different types of microprocessor from different companies run specialized types of programming code. The list of commands that a microprocessor can run is known as the processor's instruction set.

One of the most common types of microprocessor is the family of chips known as x86 devices, including a line of common processors made by Intel and some chips made by their competitors, such as Advanced Micro Devices. These have a relatively long instruction set, and they're commonly found in desktop and laptop computers. Examples of chips in this family include Intel's Pentium and Xeon microprocessors and the Athlon and Opteron chips made by AMD.

If you're considering what device to buy, or even installing a processor in a computer you're building, you may need to compare different microprocessor models. Aside from choosing a brand you trust, you can also compare the stats of the processors themselves.

For example, a processor might advertise its speed in megahertz and gigahertz. Faster processors can execute more commands per second, meaning your computer will execute tasks faster. Processors may also advertise having a certain number of cores, meaning independent units within the chip that can operate in parallel, doing separate tasks simultaneously. Generally, processors with more cores work faster.

On the other hand, because speedier processors often use more electricity and generate more heat, many processors advertise the amount of energy they use. Having a more efficient processor can translate to savings on your electric bill and needing to charge the battery in your smart phone or laptop less frequently.

In the computer world, standard microprocessors aren't the only chips capable of doing logical and mathematical operations. Lots of devices carry specialized chips.

Some of the most common are graphics processing units, designed to do the math involved in drawing graphics on a computer screen – a type of math that's also useful for applications like artificial intelligence.

Other processing chips are optimized for different types of functionality, from working with cryptocurrency like bitcoin to processing audio to handling physics simulations for applications like video games. These specialized processors aren't normally used for general-purpose applications. Why Is a Microprocessor Important?

Around The Home
Productivity
By: David Sandoval

How to Determine a CPU Socket Type

Around The Home
Productivity
By: Charles Jackson

Around The Home
Productivity
By: Jennifer Claerr