What Are the Parts of a Video Camera?

Video cameras can vary from Web cams for computers to small hand-held camcorders to large cameras used in film and television, but they all share a number of important parts. Each of these parts is needed for the camera to function properly, just like the human body, a car or any other complex machine. 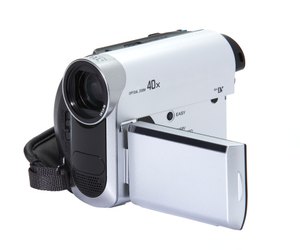 A viewfinder screen prevents the user from having to hold the camera close to the eye.

The lens on a video camera serves as the same function as a still camera's lens. It draws in light and captures the image at which the camera points. This telescopic piece can have multiple lenses within it. A number of dials on the tube will shift the lens positions by turning them, and this controls how the lenses focus the light they receive to clarify the picture.

The viewfinder is directly connected to the lens and is meant to provide access to the image for the user. This can be a simple eye-sized window, or it may be a small pixel screen that folds into the camera when not in use; many models have both versions. Viewfinders also double as a video screens for playing back the recorded image.

The lens picks up only the visual images for the camera, meaning this alone would create a silent picture. Video cameras, therefore, also include microphones that record sound in the area. The microphone is usually mounted next to the lens and pointing in the same direction so the audio and video are closely in sync.

The recorder processes the images received by the lens and the sound from the microphone and records them to memory. On older analog cameras, this would record the image onto a magnetic tape within a cassette. Some cameras would take full VCR tapes, but others require miniature versions of these cassettes or other formats like Hi8. Digital cameras eliminate the need for cassettes. The camera instead records the image as a computer video file. In most cases, this file is in JPEG format.

The camera's main controls include the Power switch and the Record button. It will also include playback buttons such as Play, Stop, Rewind, Fast Forward and Pause. The controls also include output ports to connect the camera for playback. All cameras should include the basic red/white/yellow RCA cables to connect to any playback machine, but they can also include USB or FireWire controls for connection to a computer.

Battery power is essential for camera use. Every camera is equipped with a rechargeable battery. Most batteries are lithium-ion based, and each is made and designed to work specifically with its camera model only. A full battery charge can usually take 12 hours, meaning an overnight charge will suffice.

How to Connect a Video Camera to a Projector

Camera Parts and Their Function

Around The Home
Entertainment
By: Ashley Bustamante

How Do Hidden Wireless Cameras Work?

Around The Home
Entertainment
By: Isaiah David

What Does DSC Mean in Cameras?

Around The Home
Entertainment
By: Frank M. Young

How to Add Security Cameras to a DirecTV System

How to Connect a Canon Lens Hood

Around The Home
Entertainment
By: Carol Reeves