What Does "Cc" Mean?

When you send an email to multiple people, you might see the option to designate some of the recipients as a "CC" or "BCC" by typing their names or addresses in CC or BCC fields that appear underneath the "To" field. The abbreviation "CC" refers to "carbon copy" or "courtesy copy." Each person listed as a CC recipient receives a copy of the email and can see the list of CC recipients. People listed under "BCC," which stands for "blind carbon copy," also get a copy of the message, but nobody else can see that they received it. 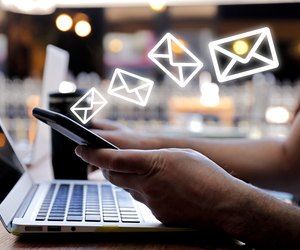 What Does CC Mean?

The term may seem esoteric today, but "carbon copy" was once a common term in office correspondence. When letters were typed or handwritten, a sheet of carbon paper was placed behind the document to transfer a pencil-like copy of the typed or written document to a second sheet of paper, which could be saved in a file or sent to an additional recipient.

Carbon paper has been phased out in favor of photocopies and electronic messaging such as email, but the term CC lives on in many most email programs. People often use CC to send copies of an email to someone else involved in a transaction or to their bosses or employees who might be involved in a matter later on. A person who is CC'd on an email is usually not expected to respond. The term "CC" can be used as a verb, as in "please CC me on that message."

In less formal settings, people may CC each other on emails to plan vacations, share photos or otherwise communicate with multiple people simultaneously.

In addition to the traditional CC, it's possible to send someone a BCC on an email. In that case, that recipient receives a copy of the message, but nobody else can see that they received it.

The BCC designation can be used to keep someone informed about a sensitive matter without disclosing that you're doing so. It can also be used as a privacy measure so that recipients of a broad mailing can't see one another's contact information or names.

It's usually considered bad etiquette to "reply all" on a BCC message you receive because it discloses that you received the BCC copy, which was not the sender's intent. In some cases, someone may openly state that they are moving a recipient on a message chain to BCC status to indicate to that person and others that they're no longer involved in the correspondence and need receive no further messages.

Around The Home
Productivity
By: Jessica Leigh

How to Create an MSG File

How to Unsend an Email in Outlook

What Is the Difference Between Reply & Forward in Email?

How to Check for Spam Mail

Around The Home
Productivity
By: Laurie Rappeport