What Does It Mean to "Brick" a Phone?

"Bricking a phone" means to break a smartphone's operating system so severely that it no longer works, making the device as useful as a brick. The term varies in common use, sometimes referring only to phones completely broken beyond repair, and other times to phones that can be fixed by reinstalling the operating system. Both iOS and Android have recovery modes for performing the reinstall: iOS uses a connection to iTunes, while Android uses a built-in system reset tool. 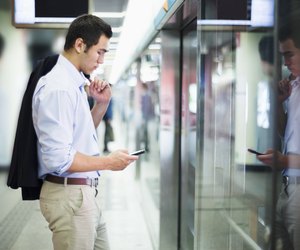 A man looking at a cell phone.
credit: XiXinXing/XiXinXing/Getty Images

Modern phones rely on numerous system files to boot up. When one or more of these files fails to load, the phone might function abnormally or, in the worst cases, completely stop working, leaving the phone a brick. Intentionally editing or deleting system files, such as when attempting to unlock, jailbreak or root a phone, can lead to a brick, but the most commonplace cause is accidental: If you turn off a phone in the middle of a system update, it can damage the system files. Sometimes, a legitimate OS upgrade has an undetected problem that can brick some phones until it's patched. Cell providers can also trigger a brick remotely after a theft, preventing a thief from using or reselling the device.

A soft-bricked phone has a repairable system error that prevents the system from starting. Hard bricks, on the other hand, refer to situations in which all attempts at repair have failed, and the only remaining option is to send the phone in for professional repair or replacement. If your phone doesn't respond at all when you press the power button, you have a hard brick. If it does respond, even if it won't boot, you might have a fixable, soft brick.

In addition to phones that are completely dead, bricking can manifest a range of symptoms. For example, a bricked iPhone might display the Apple logo, but then freeze and never finish booting. Other times, iPhones display the message "Connect to iTunes," indicating the phone needs its system reinstalled. Android phones might display an icon of the Android mascot lying down with a red triangle. Other times, a phone can get stuck in a boot loop -- the phone starts to turn on normally, but as soon as the boot sequence finishes, it turns off and restarts.

Your best bet to repair most bricks is to reformat your phone and restore its operating system. To fix an iPhone, turn it off, and then connect it to your computer while holding the "Home" button to enter recovery mode. Open iTunes on your computer and choose to restore your phone. If recovery mode doesn't work, try the more intensive Device Firmware Upgrade (DFU) mode.

Android phones offer a hidden recovery mode for resetting the system without a computer. With your phone off, hold both the "Volume Down" and "Power" buttons until you see the boot menu. Some phones use other buttons such as "Power" and "Volume Up." Use the "Volume Down" button to scroll through the menu and "Power" to select options. The exact items in the menu vary by model: Look for a "Wipe Data" or "Factory Reset" option and select it. If you don't see this option, such as on a Nexus 4, choose "Recovery Mode" and then press "Power" and "Volume Up" to reach the menu containing the reset button.

How to Reinstall the Operating System on Your iPhone

Around The Home
Entertainment
By: John Bland

How to Load CyanogenMod Using ODIN

Around The Home
Entertainment
By: Jill Kokemuller

How Do I Check My Text Messages If My Phone Is Broken?

How to Reboot an Android

How to Reflash an iPhone