What Does USB Stand For?

Since its introduction in 1995, USB has fast become one of the most essential and widespread components of computer hardware. Whether you're using a USB portable drive or connecting peripheral hardware to your computer via USB port, the chances are good that you use USB-powered tools on a daily basis. 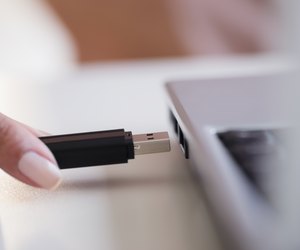 Although USB has become a ubiquitous element of modern computing, many individuals still don't know exactly what this acronym stands for. The answer to this question directly relates to the function of the hardware. USB stands for Universal Serial Bus.

Before USB became so widespread, various hardware peripherals such as printers and monitors required various forms of connection in order to ensure that they were communicating properly with the motherboard and CPU. For example, connecting your monitor to your computer would likely require a completely different form of hardware than connecting a printer. Because of this, it became very tedious and time-consuming to build a fully functional computer workstation. With the arrival of the Universal Serial Bus, devices could interact with the computer motherboard and each other using a single tool. Because it could also be used to power devices, the USB standard was particularly appealing to developers.

Since the arrival of USB in 1995, the technology has undergone several evolutions. With each iteration of USB (we are now using USB Type-C devices, for example), the speed at which data can be transferred has increased. Also, USB Type-C now features a reversible plug, meaning that either end of the USB cable can be plugged into either USB receiving port.

Although multiple evolutions of USB are currently in operation, they're all backward-compatible, meaning that USB 1.0-enabled devices can successfully operate with USB 3.1 devices. That being said, newer generation devices connected to earlier USB protocols will be forced to transfer data at the speed of the slowest hardware. With that in mind, many computer users choose to upgrade their USB cables/hardware on a regular basis in order to ensure that they're achieving the highest degree of functionality from their equipment.

Although a variety of competing hardware have challenged USB's dominance over the years, including the FireWire IEEE 1394 serial bus standard and the Intel-designed hardware interface standard, USB remains the most prevalent utility today. As USB continues to evolve, it seems likely that this particular standard will remain on the frontlines of computer technology for years to come.

How to Boot a Dell Precision Workstation From a USB

How to Convert FireWire Connections to USB

What Is a USB Slave?

How to Find High Speed USB Ports on a Computer