What Is a Com1 Port?

A COM1 port is a serial port on a computer. A serial port is a socket enabling peripheral devices like a mouse or a modem to connect to the computer via a cable. Serial ports have been replaced by the small Universal Serial Bus Connectors. Newer computers do not have a COM1 port; they connect to peripherals via a USB port instead. 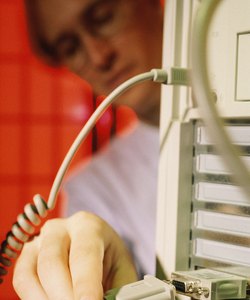 The COM1 port is bulky.

A serial port gets its name because data travels down a cable leading from a serial port in series, as opposed to parallel. Data moves around inside a computer along eight parallel wires. A byte of data leaves one point and arrives at another simultaneously. A byte is 8 bits of data, each bit traveling down one of the parallel wires. A parallel cable, connected to a parallel port continues this configuration, but a serial port sends all the data down the same wire and so has to reorganize the order of the data so that each bit follows the others in order, rather than 8 bits traveling simultaneously down parallel wires.

An old computer would have one parallel port, possibly one "serial port" and two "COM" ports. The COM ports are serial ports. The "COM" stands for "communication" and the naming convention was created by Microsoft for its DOS operating system. It was possible to create a virtual COM port by mapping several "COM"names onto the same physical port.

A parallel cable looks like as ribbon, made up of a row of wires with their plastic casing fused together; a serial cable is one thick cable. The clue to what lies inside the cable jacket comes from the connector. This is a large head with two rows of pins (male) or holes (female). Although serial ports channel data down one wire, the cable contains a collection of wires. Each is used for a different purpose. Data travels away from the computer down one pin and into the computer down another pin. The identification of the use of each pin is confused by the existence of two different designs for the connector. The overall standard for the connectors is called "RS-232," but this contains two layouts. A 25-pin connector and a 9-pin connector. The 25-pin connector is called a "DB-25" and the 9-pin connector is called a "DE-9." The other pins on the DE-9 carry control signals. On the DB-25, only 10 of the 25 pins actually connect to wires, and only two of the 10 connected pins carry data. The rest are for control data and for an electric ground wire.

The large size of the serial connectors hampered the process of miniaturization of laptop computers. The case of the computer could not be made thinner than the requirements of the RS-232 socket hosing. Computer manufacturers have switched over to USB connectors, which do not carry the COM1, COM2, COM3 naming convention. COM1 ports are slipping into computing history.

How to Make an RS232 Serial Cable

Around The Home
Productivity
By: DaveW

Around The Home
Productivity
By: BrianNelson

What Is a D-Sub Port?

The Difference Between Parallel & Serial Communication

How to Connect Ribbon Cable