What Is DHCP Lease Time?

The dynamic host configuration protocol, or DHCP, assigns internet protocol addresses and other settings to devices on a computer network. A device is assigned an IP address for a length of time called its DHCP lease time. When its DHCP lease expires, it must renew the lease and potentially receive a new IP address. 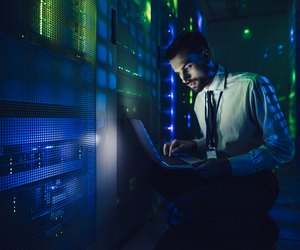 How a DHCP Lease Works

An IP address is a numeric address, somewhat similar to a phone number, that is used to identify a device on a network and the internet. A device must have one to access most local network and online resources.

The device broadcasts a request called a DHCPDISCOVER request, looking for a server on the network that can send out DHCP configuration information. If there's such a server and it's working correctly, it responds with a DHCPOFFER message specifying the IP address and other configuration data that is available.

If the device accepts what's on offer, it sends a DHCPREQUEST to reserve the IP address. The server responds with an acknowledgment specifying that the device has a DHCP lease on that IP address for a specified amount of time. The limited lease durations ensure that devices check in with the DHCP server from time to time in case configuration details need to be updated.

When the DHCP lease expires or approaches expiration, the device looks to renew its lease so it can stay on the network and the internet. This process usually happens without any involvement from the user.

The process is similar, with the device broadcasting DHCPDISCOVER and DHCPREQUEST packets and getting offers from the server. Often, it is allowed to stay on its same IP address for another lease term, but it may be assigned a new IP address or other new configuration data. If the lease renewal fails and the lease expires, the device stops using its leased IP address.

A device typically has a maximum amount of time it waits to hear from a DHCP server when it connects to a network. This period of time is known as the DHCP timeout interval.

If it doesn't hear from a server within this time, it can use a self-assigned IP address, disconnect from the network, or wait to try again, depending on the configuration settings.

How to Configure a Windows NTP Client

How to Restart NTP

What Is a PLC Communication Error?

Around The Home
Productivity
By: Laurie Brenner

Why Do I Have an Orange Blinking Light on My Linksys?

Around The Home
Productivity
By: Theresa Custodio