What to Do When Your Plasma TV Goes Black?

Nothing can ruin your day like having your plasma TV suddenly go black. There is no one solution that will get your picture back, as there are several reasons for a black screen, but there are a number of troubleshooting steps you can take to try and solve the problem. 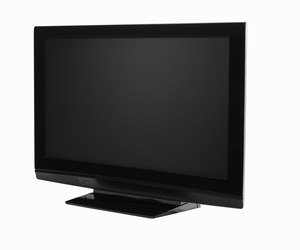 A black screen on a plasma TV can have several causes.
credit: Ryan McVay/Photodisc/Getty Images

Before digging deeper into the issue of the black screen, first you need to ensure that your plasma TV is actually turning on. Check the power cable that runs from the back of the TV to the electrical outlet to ensure it is securely connected on both ends. Then, press the "Power" button on both your television's remote and the television itself to turn the TV off and back on. If the television is getting power, you should hear it click on, and you should see some kind of LED on the TV turn on. If the TV is not turning on, you can try replacing the power cable and using another electrical outlet, but you will probably have to have the television serviced.

If the television is powering on but the screen remains blank, you can try changing the input method to see if it isn't just the cable box, DVD player or game system that isn't working. Press the "Input" or "Source" button on the remote to change the input method. On most TVs, every time you press the button the television will cycle through the available inputs, so continue to press the button until something appears on the screen. On some TVs, pressing this button will make a menu appear on the screen, so if the menu shows up you know that the TV screen is working, but the problem is with one of the input devices.

If some of the input sources work, but your screen is still black when using your desired input, you need to check that device to see if you can find the issue. Check the power cable running to the device to ensure it is receiving power. Then check the cables running from the device to the television to ensure they are secure and undamaged. Finally, turn the device on and off to see if you can get it to start sending a signal to the television. If none of these solutions work, you will have to first replace the cables in case they are bad, and then replace the device.

If nothing appears on your screen when cycling through the available channels or when pressing the "Menu" button, you will need to have your television serviced, as there is something wrong with the internal components that control the screen. You can contact the retailer where you purchased the television to inquire about a warranty service or a warranty replacement. You can also contact the plasma TV's manufacturer to see if it has any troubleshooting steps unique to its televisions, or if it has some place you can send the television for repair or replacement.

How to Fix a Sony Bravia TV That Won't Turn On

Troubleshooting a Toshiba TV With No Picture or Sound

Around The Home
Entertainment
By: Ross Glyn

How to Diagnose TV Screen Problems

What Can Cause a Samsung TV Screen to Go Blank?

Around The Home
Entertainment
By: Harvey Spector