Benefits & Disadvantages of the TV Remote

Sitting on your couch, recliner chair or on the floor and flipping through various television channels is not an uncommon practice in our society. The remote control allows you to stay in one place while doing so, which has its advantages and disadvantages. Always be aware of the convenience and inconvenience a television remote has to offer. 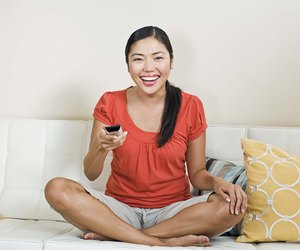 The remote control makes television viewing easier, but side effects do exist.

The major advantage to using a TV remote is the convenience it offers when watching television, especially if you like to flip around from one station to another. Without a remote, you would have to walk over to the television and manually switch the channel every time you wanted to see something new, which would be time consuming if you had hundreds of channels to choose from. With a remote, you can easily switch from one station to another. For example, if you were watching your favorite show and it went to commercial break, you could switch over to another show during that break without needing to stand up.

Some televisions do not have an on/off switch built into them and need to be powered by a remote control. Certain models of the Vizio television operate in this manner. If you own a television like this and lose the remote -- or the batteries for the remote die -- you will be unable to watch TV altogether until the remote is found or replacement batteries are purchased. If you are using the remote and someone is blocking the sensor -- or if the sensor becomes damaged -- the remote will be rendered useless.

The term "couch potato" refers to anyone who exhibits extreme laziness by laying -- or sitting -- on the couch all day watching TV. Pop culture has had fun mocking the couch potato with the likes of Homer Simpson of the "The Simpsons" and Peter Griffin of "Family Guy." However, according to "Human Values and the Effects of Television on Children" written by Karen Rivers, watching too much television can have a negative impact on a child's "imagination, ... language patterns, critical thinking, self-image ... and values in general." The TV remote makes watching TV that much easier, allowing the child to sit in one place -- instead of partaking in physical exercise -- and can increase these negative side effects. Like anything in life, watching TV -- with or without a remote -- should be done in balance with other activities.

How do I Work a Durabrand TV Without a Remote?

How to Turn the TV on Without a Remote

Around The Home
Entertainment
By: Cameron Easey

How to Fix a FPA Lock Without a Remote

Around The Home
Entertainment
By: Jeffrey Norman

How to Convert an IR Remote to an RF