Can You Overcharge Your iPhone Battery?

Apple products use lithium batteries, which are rechargeable, so you can plug your device in and let it charge for multiple uses. The lithium battery uses a trickle charge at the end of charging, so you don't need to worry about overcharging your battery by leaving the phone plugged in once it has reached a full charge. 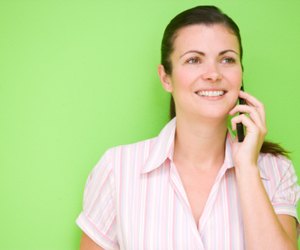 Leaving your iPhone plugged in won't overcharge it.

Lithium batteries like the type in your iPhone are different from nickel batteries. Phones that use nickel batteries are particular about how the phone must be charged, and often the phone must be fully discharged to preserve battery life. Nickel battery phones are also prone to overcharging. With a lithium battery in your iPhone, you don't need to worry about when to plug your phone in to charge, and you can charge the phone at any point without damaging the battery capacity.

Apple's iPhone uses two types of charging when you plug in your phone. For the first two hours that the phone is plugged in, the battery charges quickly so that it reaches 80 percent of the capacity, and your phone retains that charge if you need to use it immediately. If you leave the phone on the charger, the battery continues to charge at a trickle charge, which uses just a small amount of charge to continue charging up the battery until it is fully charged.

Your phone tells you when it has finished charging, by switching the icon from a charging icon to a charged icon. The charging icon looks similar to a lightening bolt, while the icon that displays when the phone is fully charged looks like a plug. Leaving the phone plugged in once the charged icon is present won't overcharge the battery; the battery stops accepting the charge.

While overcharging is not a concern, you must still be aware that the iPhone battery has a limited lifespan. After 400 charges, the phone holds a charge of only 80 percent of the battery's capacity. A charge is counted as a full discharge and recharge, so partial charges over a period of days can add up to one charge cycle. If your battery is no longer holding a charge, you may need to take the phone to an Apple service provider for a new battery.

Will an iPhone Charge in DFU Mode?

How to Turn on a Phone With a Dead Battery

How to Get Rid of an App on an iPhone

How to Sync an iPhone Calendar With a Laptop

How to Charge an iPhone on a Mac

Around The Home
Entertainment
By: Shauna Zamarripa

How to Change the Voicemail Number on an iPhone