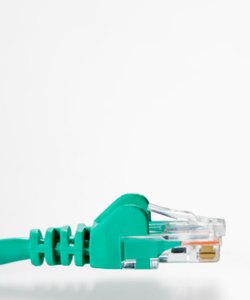 The CAT5e and RJ45 combination is the most successful cable and connector for Ethernet.

RJ45 is part of a series of official definitions of telephone connectors, created in the 1970s and endorsed by the Federal Communications Commission. "RJ" stands for "Registered Jack." The RJ45 connector is a little bigger than the standard U.S. telephone plug but otherwise has the same appearance. The connector has eight pins, which made it an ideal choice for connecting the eight wires inside a UTP cable. However, the RJ45, while having eight pins, has only two contacts to carry a charge outside the plug. Ethernet standards require eight contacts to pass charges out to corresponding contacts in the socket, and so the design of the RJ45 plug and socket was modified for use with Ethernet. The RJ definitions refer to the wiring plan and not the shape or appearance of the plug. For this reason, the Ethernet plug does not conform to the RJ45 specification and should not be referred to as RJ45. However, the use of the plug in telecommunications is very rare, so the only instance of a plug with the RJ45 appearance is in the context of Ethernet. Although the Ethernet is not really RJ45, it is known by that name.

The Electronics Industry Association is responsible for defining categories of UTP cable. The main difference between the categories is the performance enhancements of higher rates of twists in the cable's pairs. CAT5e is not the latest, or best, category of UTP; however, it is the most widely installed to date. This distinction is likely to disappear over time as the latest Ethernet definitions require a level of performance beyond the capabilities of CAT5e cable. Before CAT5e was available, CAT5 was the highest-selling category of network cable. The "e" in "5e" stands for enhanced. The latest category of UTP is CAT6, which is now recommended for faster Ethernet networks.

The combination of UTP cable RJ45 connectors for networking is so common that all computers with a network adapter have an RJ45 socket. Each of the eight wires in the CAT5e cable connects to a pin in the plug; however, only four carry a charge.

The release of CAT6 means that UTP cable can keep up with the performance requirements of Ethernet. As it is the cheapest of the different cable types recommended in the Ethernet standards, UTP is likely to remain the most widely implemented form of cable for local area networks. CAT6 also uses the RJ45 connector, and so while RJ45 will continue to be used, the CAT5e cable will fade from popularity.

What is an RJ45 Gigabit LAN Port?

How Does an Ethernet Cable Work?

Around The Home
Productivity
By: Paul Favors