An HDTV antenna is a piece of electronic equipment designed to receive television broadcasts in the form of electromagnetic signals that are being transmitted "over the air." When a television station broadcasts its programming, it is converted from audio and video information into these electromagnetic signals. The antenna receives the signals, which it then passes along to the HDTV tuner for converting it back into audio and video information. 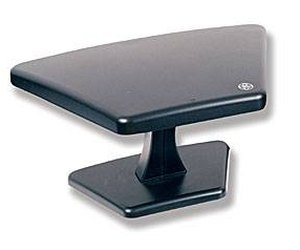 Contrary to what many think, receiving channels from an HDTV antenna actually provides better picture quality than the same channels being received via a cable television provider. Data information is compressed so it can be sent directly into your home via a coaxial cable. The same data is sent out over the air uncompressed, which means it will look and sound better. Cable television obviously offers a far greater quantity and variety of channels than simply having an antenna does, but improved picture quality is a definite advantage of the HDTV antenna.

How to Connect a TV to an AV Receiver

The Advantages of PCM

The Advantages of Delta Modulation

How to Get Over the Air Channels on TV

Around The Home
Entertainment
By: Maxfield Carroll

How to Reset a Digital Converter Box

Around The Home
Entertainment
By: Jessica Hatter

Around The Home
Entertainment
By: Richard Asmus