To understand how a digital antenna works, you must first understand how television signal transmission works. A television station will transmit a signal containing its programming in essentially a straight line. (This is called "line of sight.") However, due to the curve of the Earth (which changes roughly every 80 or so miles), televisions farther away from the transmission source won't necessarily be able to pick up that signal. A digital antenna allows your television to pick up that signal, as long as it is within the overall range of the source, despite the curve of the Earth. 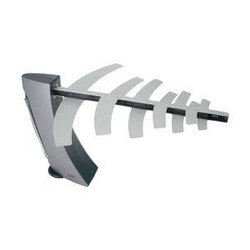 Unlike having digital cable, where your television programming is sent directly into your home via a cable, local TV stations will simply send out a broadcast and whoever is within range can pick up the signal at no additional charge. Roughly 80 percent of all households will be able to pick up at least five digital stations for free with a digital antenna, barring any physical obstacles like mountain ranges. The digital antenna will receive the television signal and convert it into audio and video information that can then be displayed by your television.

Contrary to popular belief, over-the-air broadcasts (the kind received by an antenna) are actually of higher picture quality than cable or satellite television. Cable television may offer a huge number of channels, but that visual information is compressed to be transmitted through a cable into your house. When a television station broadcasts over-the-air, that information is going out completely uncompressed. This will result in a better looking and sounding picture than even the highest quality cable box can provide.

How to Replace Cable TV or Dish TV With Antenna TV

The Advantages of PCM

How to Connect to PBS TV Stations Without Cable

Around The Home
Entertainment
By: Malik Sharrieff

Around The Home
Entertainment
By: Charlie Sim