How Much Space Is on a DVD Disc?

Consumers and businesses alike frequently use DVD discs to record video, store files and back up data. Though users typically assume that DVD discs have a universal amount of available storage, capacity varies depending on the type and physical size of the disc. 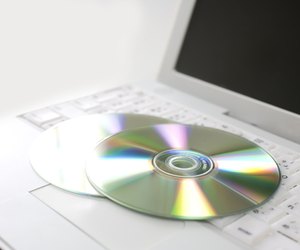 Many manufacturers offer both single-sided and double-sided DVD discs. Single-sided discs store data on one side of the disc, allowing for a label or identification sticker on the other side. According to OSTA, double-sided discs are less common outside of specialized industrial applications, primarily because they lack a convenient way to apply any form of identification.

Though double-sided DVD discs are less popular in many applications because of the lack of labeling options, some manufacturers produce discs that offer comparable storage by adding a second data layer to the disc. This layer, applied to the same side of the disc as the original data layer, is translucent. DVD readers interpret the second layer as the primary data later, but can also read the second layer to access additional files and data.

Some users may encounter an issue in which a DVD disc does not appear to hold the amount of data the manufacturer advertises. This issue, according to Apple, stems from the binary numbering system that all computers use to store and access data. Because the binary numbering system does not contain an even 1,000 figure, computers define a gigabyte of data as 1,024 megabytes. DVD disc manufacturers, by contrast, do not use this binary system. Instead, a gigabyte of data on a DVD disc is accurately noted as 1,000 megabytes. On a single-sided, 12 centimeter removable double-layer DVD disc, this small discrepancy adds up to more than 225 megabytes. For this reason, computer users may be unable to burn 9.4 gigabytes of data stored on a computer to a DVD advertised to hold 9.4 gigabytes. What Are Optical Storage Devices?

What Is the Difference Between DVD & Blu-Ray?

Around The Home
Entertainment
By: Lou Martin

Around The Home
Entertainment
By: Peggy Epstein