How to Convert an HDMI to RCA

The High Definition Multimedia Interface (HDMI) port is fast replacing older analog video outputs. RCA composite video jacks were the most common video input for older video equipment. The HDMI port is a high quality digital connection that can include both audio and high definition video signals. Newer laptops, televisions, Blu-Ray disc players and HD camcorders all include the HDMI port. When you need to plug a video device that only has an HDMI port into an older video device, you will need to find a solution to convert the digital video signal to an analog one. 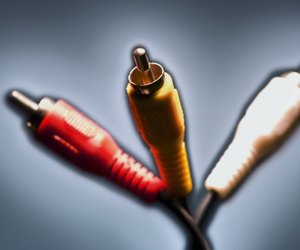 Plug your HDMI video cable output into HDMI input of the Atlona AT-HD530 HDMI/DVI To Composite And S-Video Down-Converter. Then plug an RCA video cable from the composite output of this device to the RCA input of your video device. If the HDMI cable includes an audio signal, use the audio output from the AT-HD530 to connect an RCA stereo cable from the RCA output jacks to the RCA audio inputs of your video device.

Connect your HDMI output to the input of a GefenTV GTV-HDMI-2-COMPSVIDS HDMI to Composite Scaler. Though more expensive, the Gefen HDMI to Composite converter unit includes the ability to switch between European and American television standards for the composite RCA output. The connections work exactly the same as described for the Atlona unit described in step 1

Plug an HDMI output into the TV One VS-226 HDMI to CV/SV/Stereo Down Converter. The most expensive unit of the three, this converter is housed in a small non-descript black box. Connect the HDMI video device to an RCA composite input using the procedure from step 1.

Around The Home
Entertainment
By: Bryan Roberts

How to Hook Up a GE RF Modulator

Around The Home
Entertainment
By: Dean Lee

How Do I Setup HDMI for My Dynex Flat Screen TV?

How to Convert D-SUB to HDMI

How do I Convert RCA Red White Yellow to a Coax Cable Output?

Around The Home
Entertainment
By: Richard Klopfenstein