How to Do a Screenshot on a Dell Keyboard

If you want to take a screenshot on a Dell desktop or laptop computer system, there's an easy keyboard shortcut that captures an image of the contents of a single window or the entire display. The screenshot image is copied to the system clipboard, where you can then paste it into an application such as Microsoft Paint or save it as an image file. 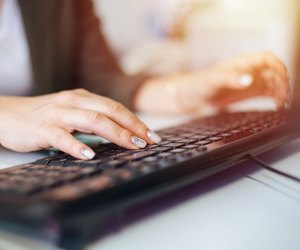 How to Do a Screenshot on a Dell Keyboard
credit: agrobacter/E+/GettyImages

Dell keyboards provide a dedicated Print Screen key that can be used for screenshots. The label on the key varies on different Dell computers and laptops but is usually some abbreviation of Print Screen such as PrntScrn, PrntScr or PrtScr. The key is typically located in the upper right corner of the keyboard, adjacent to the function keys.

On Dell computers running Windows 7 and later versions, press the Print Screen key to capture a desktop screenshot. To capture the currently active window instead of the entire desktop, press the Alt + Print Screen keys together. You can make a window active by clicking on any part of it. The captured image is stored the system clipboard and can be pasted into Microsoft Word, Microsoft Paint or any other supporting application by pressing the Ctrl + V keyboard combination or by selecting Paste from an application menu.

Taking a Screenshot in Windows 10

In Windows 8.1 and Windows 10, press the Windows + Print Screen keys to capture a screenshot and save it to a file. The screenshot image is saved as a PNG file in the Pictures/Screenshots folder. The name of the file is automatically supplied by Windows as Screenshot(1).png, Screenshot(2).png and so on, with each successive screenshot automatically incrementing the number used in the filename. Note that the Screenshots folder does not exist until the first time you do a screen capture to file.

Substitutes for the Print Screen Key

Although most Dell keyboards have a dedicated Print Screen key, on some keyboards, Print Screen is combined with one of the function keys marked F1 to F12. In this case, a Print Screen label is included on the key. Pressing the Fn key at the same time as the appropriate F key performs a screenshot capture. On some systems, the sound of a camera shutter snapping can be heard when the capture occurs.

Most tablets are used without a keyboard, but you still may want to capture an image of the display. On Dell tablets running Windows 10, press the Windows logo + Volume Down buttons at the same time. The screen momentarily dims and then brightens to indicate the capture has taken place. The image is saved as a PNG file in the Screenshots folder.

After you complete a capture, it's shown in the display area of the Snipping Tool. You can then use a pen or highlighter tool to make notes on the image and draw attention to certain areas. An eraser tool is also provided to remove added notes. The screenshot image can be saved in a standard file format such as PNG, GIF or JPEG. It's also automatically copied to the system clipboard and can be pasted into other applications.

How to Make a Screen Shot Using the Control Keys

Around The Home
Productivity
By: James Highland

How to Print a Screen Shot

Around The Home
Productivity
By: Damarious Page

How to Disable the Print Screen Key in Windows

Around The Home
Productivity
By: Michelle Raphael

How to Print Screen

How to Take a Screenshot on Your Laptop

How to Take a Screen Shot With an HP Pavilion