How to Make Smiley Faces With a Computer Keyboard

There are several ways to make a smiley face keyboard symbol appear on your computer screen or in an email or text message. You can type one using punctuation keys, which is an easy smiley face keyboard shortcut if you aren't sure which symbols another person can see on a particular device. You can also use emoji, which are graphics that are available on many modern phone keyboards and computers. Certain programs, such as messaging programs and games, may also have a custom smiley face text symbol to copy and paste or type directly. 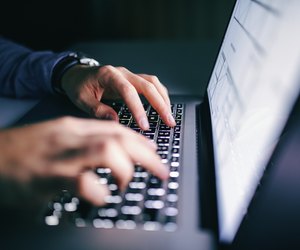 There are several ways to make a smiley face keyboard symbol appear on your computer screen or in an email or text message.
credit: dusanpetkovic/iStock/GettyImages

Through at least the 1990s, when people wanted to add a bit of levity to their online posts, emails and other internet messages, they could type emoticons into their messages. These made smiley faces and other expressive images using punctuation symbols found on a regular keyboard. Some examples include:

You can find other examples of these kinds of emoticons online or in books about internet culture. Type them using the keyboard on your computer or the keyboard app on your phone.

More recently, additional symbols known as emoji were developed for use in messaging. They originated in Japan, but they're used all over the world. Many emoji are available on modern computer and phone operating systems. The most common emoji are part of Unicode, an international standard for representing letters and symbols from around the world on digital devices. Different emoji include various smiley faces, sad faces, laughing faces, and other symbols such as stop signs, phones and food items.

Typing Emoji on a Keyboard

If you're using a cellphone, you can usually select emoji from the keyboard app on your device by tapping and selecting them just as you would any other letter, number or punctuation symbol. On a computer, these symbols don't appear on the traditional keyboard, so things are a bit more tricky.

Still, you can use programs like Character Map on Microsoft Windows or the Character Viewer on Apple Mac computers that let you scroll through emoji and other special symbols to copy and paste into your messages and documents. You can also find keyboard shortcuts to type particular emoji and other symbols on your computer by searching online.

Some programs on your computer may have special buttons or keyboard shortcuts that you can use to type emoji and emoticons. For example, the popular messaging programs Slack and Discord support keyboard options for typing emoji based on what they represent. Many other software tools support these same shortcuts. For example, :smile: represents a smiling face and :cry: represents a tearful face.

Computer games and chat systems may have their own symbols beyond standard emoji. Read the documentation for systems you use or observe what other people are sending and ask them what the symbols mean and how to use them yourself.

Making Sure You're Understood

Keep in mind that emoji look slightly different from device to device and that some people may interpret emoji and other symbols differently from other people. If you think a symbol is ambiguous or may potentially offend someone, it may be better to leave it out and express yourself clearly in words.

Some programs may also generate special symbols that don't show up properly in other programs, especially when it comes to email or messaging. This is also true of emoji because not all software supports the latest emoji without an update.

How to Delete Your Messages in Someone Else's Voicemail Box

Around The Home
Entertainment
By: Michael Roennevig

How to Make a Crying Emoticon

Around The Home
Productivity
By: Angela M. Wheeland

How to Make a Devil Face Through a Text Message

Around The Home
Entertainment
By: Dwight Dunkley

How Do I Forward AT&T Voice Mail?

Around The Home
Entertainment
By: Paul Ramone

How to Set Up Voice Mail on a Nokia Cell Phone