Flirt with friends — or make new ones — by sending kiss emoticons using SMS text messages or your favorite messaging app. The appearance of emoticons can vary among apps and devices, but they are essentially the same. Most manufacturers and developers use international standards so no matter which app or device you use to send a kiss, your friend should still get the message. 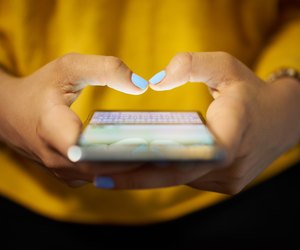 Launch your Messages app on a tablet or smartphone or in a social media app like Facebook. Tap the Emoticon icon located on the keyboard or beside the text field in the app. The universal icon for emoticons is usually a happy face.

Scroll through the icons and tap the emoticon or kiss emoji that you like. These can vary from one device or app to another. Apple iOS devices, for example, have a lipstick kiss and a kissing face with a heart in the Messages app. Facebook has a winking kissy face emoticon. Some programs, such as Slack and Discord, the popular chat tools, may let you type special keyboard shortcuts for certain emoji as well, such as ":kissing:" for a kissy face.

Tap or click Send. The emoticon is sent to your friend just like any text message. Note that the emoticons your friend sees may be slightly different from what you see, depending on which device he has. If you are concerned that an emoticon or emoji might not be well understood, you may want to explain what you're sending in text or leave the symbol out altogether.

Other Alternatives for Sending Kisses

If you're using Facebook Messenger, you can also use Unicode symbols to flirt with friends or get icons from the Facebook sticker store.

Many programs including Facebook Messenger also support sending animated GIFs of memes and other images that can add color to your messages. Look for a GIF icon in the program you're using and use the search options to find a relevant image.

Type a colon and then an asterisk to create a text-based emoticon with your keyboard. If you tilt your head to the left, the symbols resemble a pair of eyes and a mouth puckered for a kiss. These types of symbols were used before emoji became commonplace, and they have the advantage of looking essentially the same from device to device. If you prefer:

Press or tap the Send button. If you're sending the text-based emojis using an SMS text message app on a phone, your friend should see them as text too. Some apps, like Facebook Messenger, may convert the emoticons to emoji if they recognize them.

If you don't want an app to convert your text-based kiss to an emoticon, insert a space between the symbols, like :- or : -.

How to Respond to a Heart Emoticon

How to Make a Thumbs-Up on the Keyboard

Around The Home
Productivity
By: Karie Lapham Fay

Cool Ways to Say "I Love You" With Your Keyboard

Around The Home
Productivity
By: Angela Roe

How to Make Smiley Faces With a Computer Keyboard

Around The Home
Entertainment
By: Casey Kennedy