How to Make the iPad Screen Go From Vertical to Horizontal

The iPad's built-in gyroscope automatically detects when you turn the tablet from a horizontal landscape orientation to a vertical portrait one, and adjusts the screen display accordingly. If you are not seeing this behavior, you may have the orientation lock switched on, which fixes the display in one position. Another possibility is that you're running an application that doesn't support landscape or portrait mode, and so rotating the device won't make any difference. 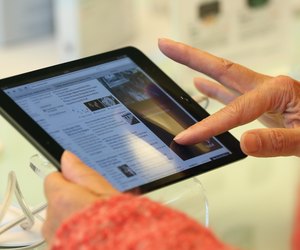 Double-tap the iPad's Home button to bring up a row of recently used apps. Swipe left until you reach the media player controls. If the icon on the far left side shows a circular arrow symbol with a padlock inside, tap it once to remove the padlock. If there is no padlock, the orientation lock should be off. If the icon shows a speaker symbol, the orientation lock on your iPad is controlled by the side switch, in which case flick the side switch upwards or to the left to disable the lock. Check that no padlock symbol is shown by the battery charge level on the notification bar.

Turn the iPad from a vertical position to a horizontal one by rotating it in your hands. Your hands should be at the shorter ends of the tablet -- by the Sleep/Wake button and the Home button -- rather than at the longer sides. Most iPad apps, including the official Apple software programs and iOS itself, should rotate to match the new orientation, provided that the orientation lock has been disabled.

Reset your iPad if the device isn't responding to the new orientation. Press and hold the Sleep/Wake button for at least 10 seconds. Ignore the red "slide to power off" message and keep the button depressed until the Apple logo appears, which indicates that the device is restarting. This clears the iPad's memory and resets any frozen apps without affecting your data or files.

How to Unlock the Screen Rotation on an iPad

How to Change an IPhone Auto-Lock Time

Around The Home
Entertainment
By: Nick Peers

How to Send SMS on Wi-Fi to an iPhone

Around The Home
Entertainment
By: Mordekai

How to Disable the Android Accelerometer

How to Hear Sound on an iPad