How to Put a Countdown Timer on a Video

If you happen to have a unique video in which something significant happens at some point in time, adding a countdown timer to it can help build suspense and draw attention to that certain happening. With dozens of video applications to choose from, you can create a unique piece of media very simply by following a few steps. 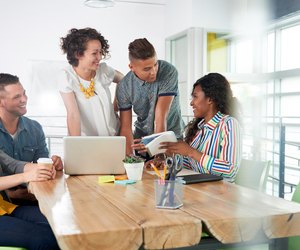 Adding A Countdown Timer To A Video

If you already have the video to which you would like to add a countdown timer, locate it on your hard drive and import into a new project in your video editing application.

Drag your video into the "timeline" window in your editing application; no matter what application you are using, it should have some variation of this timeline window. This is the place where you will drag your video elements and arrange them.

Add the Numbers To You Countdown

Whatever video editing application you are using, it should have some sort of tool to add text. Use this tool to add the first number to your countdown. For your first number, use the highest number in your countdown. You will now have a new video layer (the number) in your timeline. You can now scale the number down and place it in whatever part of the frame you wish. Putting it off to the side of the frame might work best to keep it from covering up the video. Many editing applications allow you to add different kinds of effects as well.

Once the text layer is in your timeline, you need to make sure it only plays for one second. The editing application you are using should have a "cut" or "split" tool with which you can cut the text layer at a certain point in time. Starting at the first frame of your text layer, scroll your playhead forward in time one second (the number guides at the top of the timeline window can help you). Cut the layer at this point and delete the second part of the layer, leaving the first layer playing for one second.

Repeat this process for each number until you reach the "big moment" in time in your video. The countdown will create a buildup until this moment and make your video more exciting.

Save your video as a digital movie file in whatever format you choose. Some of the most common digital video formats include .mov, .avi, and .wmv.

How to Rotate a Video in After Effects

Around The Home
Productivity
By: Susan Joyce

How to Upload a Video at Badoo

How to Create an Intro in iMovie

Around The Home
Productivity
By: Etch Tabor

How to Insert an Image Overlay in Windows Movie Maker

Around The Home
Productivity
By: Erin McManaway

How to Trim Clips in iMovie

Around The Home
Productivity
By: Etch Tabor