Mono and stereo audio offer significantly different listening experiences. While stereo is the most common format for home audio systems and for recorded music, mono sound provides distinct benefits for consumers seeking a high-quality experience from older recordings. The essential difference between mono and stereo arises from the type of signal an amplifier transmits to a speaker -- not the type or number of speakers -- so a working knowledge of stereo and mono sound is vital for informed consumers and audio technicians seeking the best possible listening experience. 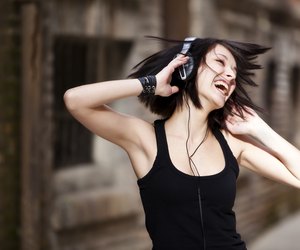 Home or personal audio systems create stereophonic sound by transmitting two independent signals through two separate channels into a pair of speakers. Stereo systems are best used to replicate the sensation of hearing a band or orchestra performing live. As the independent signals emphasize different instruments or sounds in the right and left channels, stereo sound is considered to have more "depth," recreating the sound of individual instruments located in different areas. For the best experience, the listener must place himself directly in the middle of the two speakers, which creates a sensation referred to as "audio imaging" by some listeners.

Amplifiers produce monophonic or "mono" sound by transmitting a single signal channel to one or more speakers -- even if two speakers are used, a mono signal will produce the exact same sound levels in each speaker. Therefore, mono conveys no sensation of depth or location, unlike stereo speakers. Even through headphones, monophonic sound will produce a single "cluster" of music, without the sensation of audio imaging.

Since stereo became the standard format for recorded music in the late 1960s, the majority of home audio systems and headphones use stereo amplification. Stereo is also standard for most PA systems in concert halls, due to its ability to replicate the physical separation of instruments onstage. According to Wayne Wadham's "A Short History of the Multitrack Recording Studio," FM radio is broadcast in stereo, and nearly every song recorded since the early '70s has been recorded and mixed with stereo sound in mind.

While stereo is the most commonly used audio system, there are some distinct advantages to mono sound in certain situations. For example, musicians such as the Beatles would focus on the mono mixes of their songs rather than the stereo mixes, as AM radio stations preferred the sound of mono for hit singles. Stereo was considered a new technology and was thus generally ignored by many great early rock musicians. Since performers intended for their music to be heard in mono, earlier recordings can sound more powerful and dynamic in mono. Additionally, mono is a better format for public speeches, where the clarity of a single amplified voice is the focus of the sound mix.

Advice for Consumers and Technicians

Today, sound equipment companies rarely manufacture mono sound systems, ensuring that the average cost of a stereo system is much lower. Thus, consumers shopping for a home sound system should purchase stereophonic audio amplifiers and speakers. However, when you're shopping for recordings of older music, such as the Beatles, you may wish to seek out mono versions whenever possible. For live sound, audio technicians should use stereo for musical performances and mono for speeches or panel discussions.

How Do PA Systems Work?

Around The Home
Entertainment
By: Paul Bright

Around The Home
Entertainment
By: John Smith

How to Set Equalizers

Around The Home
Entertainment
By: Matt McKay