The Central Processing Unit, or CPU, is arguably one of the most important pieces of hardware inside a computer. Although a CPU cannot operate without the assistance of a motherboard, also known as a logic board, it is the CPU that coordinates the intricate logic and mathematical operations that allow applications to run and users to execute tasks. Knowing how critical the CPU is, many individuals are interested in learning more about the individual parts of the CPU itself. You can undertake a quick exploration of the CPU and learn a trove of valuable information about this processor. 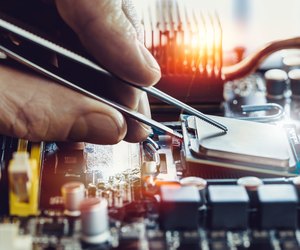 A computer's CPU features two main components: the arithmetic logic unit, also referred to as the ALU, and the Control Unit, or CU. Working together, these two distinct components of the CPU allow this particular processor to handle a wide array of functions and tasks rapidly. Depending on the size of the computer in question, a CPU can consist of either a series of printed circuit boards or a single microprocessor. If you own a desktop or laptop computer, your CPU is constructed as a microprocessor rather than a combination of circuit boards.

The CPU is typically attached to a motherboard, which provides the power. Because of the sheer number of tasks delegated to the CPU, these units can heat up during operation. With that in mind, a motherboard often has fans attached to it or located nearby to cool the CPU during use. Excessive temperatures can damage a CPU over time.

As the name implies, the arithmetic logic unit is primarily designed to manage all the math-based operations occurring in the CPU. The control unit has a more diverse set of responsibilities. During use, the CU takes various instruction sets from available memory in the computer, translates them for use and then executes them. When the ALU is needed to complete one of these tasks, the CU coordinates with it to ensure that the task is completed successfully. Combined, the CU and ALU are capable of tackling all the responsibilities of the CPU.

The performance of a CPU is often measured in terms of its speed, measured in gigahertz. This unit of measurement is used to describe the exact number of commands a CPU can execute within a single second. The larger the number of gigahertz, the more powerful the processor.

The Factors Determining the Speed & Power of a Computer