Parts of the Computer & Their Functions

Computers are assembled from several key components that make the computer functional, called hardware. While most computer users are primarily familiar with the monitor, keyboard, mouse, and other peripherals, the most important physical parts of a computer exist inside the case. 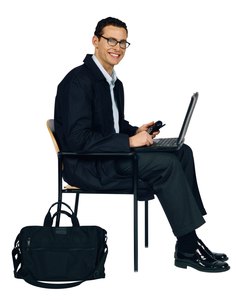 The central processing unit processes all of the data that is accessed by the machine. In PCs the CPU, or microprocessor, is a small silicon chip located beneath the fan. Essentially, the purpose of a CPU is to process instructions through a four-part sequence of fetching, decoding, execution and writeback.

Since the mid-2000s, most computers are sold with multi-core CPUs, which integrate two or more processors into one unit. In 2007, Intel built an 80-core processor that can handle a trillion operations per second.

Random access memory, also known as main memory, provides a buffer between the hard drive and central processing unit. When files are requested for processing, they get transferred from the hard drive to the memory. The CPU then processes the file and replaces it in the memory.

The RAM provides a temporary storage that gets erased when power is removed from the machine. It is important to save modified files to the hard drive so that they get saved if power is lost.

A hard drive provides permanent storage for the operating system, programs and files on a machine. When files are saved to the hard drive, they are retained through power outages. Traditional hard drives are composed of magnetic platters that spin when in use. Solid state drives, which contain no moving parts, are another option.

Computers made after 2009 are usually equipped with either SATA drives, which replaced the older IDE, or parallel ATA, drive technology, or solid state drives. SATA drives use slimmer cables, smaller power connections, do not get as hot and can transfer data faster than the older drives.

The power supply unit converts AC power from your wall outlet to DC power, usable by the computer internals, and controls power saving. The original PSUs could only be turned on or off, but ATX-compliant ones, first developed in 1995, support standby mode and powering peripherals while the PC is not on.

Types of Computers & Their Functions