The 1950s were prosperous years for the United States and saw many technological and economic advances. One of these forward strides was the widespread adoption of the telephone in American homes and businesses. By the 1950s, roughly two-thirds of American households had at least one telephone, with the percentage growing every year. The core technology was already highly advanced, similar to landline technology in the 21st century, but none of the ancillary technologies like voicemail and text messaging existed yet. It was also a different time in that one company, AT&T, controlled nearly the entire industry. 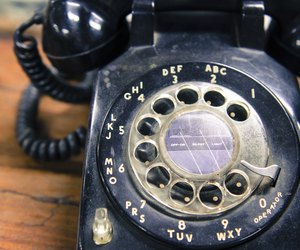 Telephones in the 1950s had a sleek, shiny appearance but were bulky by 2010s standards. They consisted of a freestanding base with a rotary dial on the front -- as keypads had not yet been introduced. The dial had 10 finger holes in it, corresponding to the digits 1 through 9 and zero. By winding the phone from the correct finger hole, callers could dial any number. Behind the dial was a holster for the receiver. The receiver resembled a horn, with a large earpiece and mouthpiece on either end and a comfortable handgrip in the middle. The base itself housed two bells for the ringer, a spring for the rotary dial, a governor to keep the spring from uncoiling too quickly and various electronic components.

In the 1950s, people didn't own their telephones. They rented them from AT&T, which wanted to supply universal telephone service to the country and had consented to become a regulated monopoly in 1913, remaining so for most of the 20th century. During this time, AT&T allowed the Federal Communications Commission to approve its policies and prices. In return, AT&T and its subsidiaries became the sole providers of everything a person needed for telephone service. With only a few exceptions, AT&T owned the phones, the phone lines and the networks, and provided both local and long-distance telephone service to the majority of Americans. AT&T was ruthlessly restrictive about the use of its products and services and regularly sued other companies who manufactured their own devices to attach to AT&T phones or lines. For decades, AT&T won these battles, but in 1956, a court ruling went the other way. This eventually led to other companies being allowed to make products that would modify AT&T products and services, which, decades later, would help unravel AT&T's monopoly.

Telephone aesthetics didn't change much during the 1950s. Since it already controlled the market, AT&T had no reason to offer unnecessary choices and complexity. Consumers had their pick of several different models of freestanding and wall-mounted units, encased in shiny plastic that came in a variety of colors -- mostly black, white and brown, though brighter colors like red and teal were available as well. Otherwise, there was little variety available. This differed greatly from the conventions of the 2010s, where aesthetics are a major competitive selling point.

Unlike aesthetics, technological innovations continued apace throughout the 1950s. By the end of the decade, nearly all the remaining manual local telephone exchanges, which required a human operator to connect a local phone call, had been replaced by automatic exchanges although operators remained available for directory assistance. Direct distance dialing also came about in the 1950s, allowing callers to directly dial long-distance numbers without an operator intermediary. Another major change was the gradual phase-out of the named telephone exchange system. Until the 1950s, telephone numbers typically consisted of letters followed by numbers. These letters were mnemonics that mapped to words, making phone numbers easier to remember and served as names for the local telephone exchanges that handled those phone lines. As late as 1955, AT&T was still updating and streamlining this system, but in 1958 began to phase it out in favor of the all-number dialing used today.

Around The Home
Entertainment
By: Fraser Sherman

What Does Sbcglobal.net Stand For?

Parts of the Landline Phone

Around The Home
Productivity
By: Miggi Sanchez

History of the Rotary Phone

Around The Home
Productivity
By: Jason Isbell

The Advantages of 1G Mobile Phones