Humans have always been developing new technologies for communication, going back to the printing press and even the act of writing itself. But the past 120 years, or so, has seen especially rapid technological advancement in communication, from the first telephones through the modern internet. 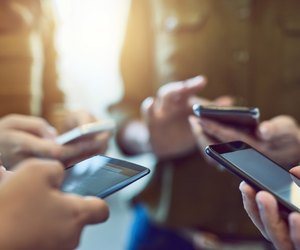 Notable technological advancements in communication since the late 1800s include the telephone and related technologies like the answering machine and fax machine, the internet and the cellular telephone. Mass communication also brought revolutionary changes, including movies, broadcast radio and television and tremendous advances in printing and photography.

While the invention of the wired telegraph enabled people to rapidly communicate over long distances, the telephone was the first instantaneous communications device to find its way into large numbers of homes and businesses.

Alexander Graham Bell patented the invention in the 1870s, and within a few decades millions of the devices were in use. Phones enabled people to connect with neighbors and, for a larger fee, friends and family around the country and around the world. The technology gradually improved to enable calls without operator assistance and, eventually, to allow direct-dial long-distance and international calls.

Landline phones gradually evolved from models that connected the user simply to an operator who would place a call to rotary phones, enabling automatic dialing, then to touch-tone phones, allowing for speedier calls. Answering machines were developed to record messages from callers when recipients were away or busy. And public pay phones popped up to let people make calls on the go.

Fax machines also became common in offices, especially starting in the 1980s. These allowed use of telephone lines for sending document copies relatively quickly without having to mail them or send them by private messenger.

Computers and the Internet

By the late '60s, researchers had begun to create the beginnings of today's internet through a government-backed network called Arpanet, named for the Defense Departments' Advanced Research Projects Agency. That network connected universities, government agencies and communications companies. By 1972, the first Arpanet email was sent. Networking protocols, meaning the systems that computers use to talk to each other electronically, were developed in this period.

By the late '70s and '80s, as home computers became somewhat common, local bulletin board systems popped up, allowing computer users to connect to an often free-and-hobbyist-run system where they could exchange messages, play games and otherwise share information with other users. Email between BBSes was possible but slow, since the systems had to actually dial in to one another to pass messages from one bulletin board to another.

National commercial online services, such as CompuServe, Prodigy and America Online, also popped up during the '80s and grew during the '90s. The services were slow, expensive and primitive-looking by today's standards, but they allowed users from around the U.S. to communicate, read news, get weather information and more from their home computers.

By the mid-'90s, many of these services and new dial-in internet service providers allowed users to connect to the rapidly growing internet, a descendant of Arpanet. Users could access websites, send emails and instant messages and access other online services, including some BBSes that had moved to the internet, usually using slow dial-up modems.

As telephone companies and cable companies began offering faster connections by the late '90s, the internet began to be more mainstream and more useful for things like shopping and business.

By the late '80s, portable handheld cellular phones become available, and by the late '90s, the devices were mainstream. Pagers, which allowed users to receive notifications – and simple messages – when they were called, also became popular during the '90s, though they required availability of a pay phone or other landline phone to return a call.

Pagers gave way to pocket-sized cellphones, which, for the first time, let users receive and make phone calls outside their homes or businesses. Early plans offered limited calling time and roaming ability outside a home network, but those features rapidly developed, and cellphones started to displace landline phones for some users.

Text messaging also boomed in popularity in the early 2000s, and some cellphones allowed limited access to the internet and email.

In 2007, Apple CEO Steve Jobs famously debuted the iPhone, the first modern smart phone. The device enabled full access to the World Wide Web and email, as well as traditional phone features like calling and texting. The iPhone, and Google's rival platform, Android, soon had support for third-party apps that would let users do anything from ordering food to checking bank balances.

At the same time, social media companies like Facebook and Twitter took off, allowing users to connect and share information online without requiring the IT skills needed to build a traditional website. As smart phone popularity grew, they became natural hubs for social networking, and these two technological advancements in communication grew in tandem.

New kinds of phone-first social media, including Instagram and Snapchat, appeared, as did smart phone-focused messaging tools like WhatsApp and Telegram. Many of these tools took advantage of increasingly powerful cameras built into modern smart phones.

How Have Cell Phones Changed Over Time?

10 Ways to Communicate Using the Internet

The Advantages of 1G Mobile Phones