We are living in the Information Age, and there has never been as apt a name for a particular period of human history. Digital technologies have revolutionized communication in the modern world -- a revolution so rapidly integrated into our lives that we can scarcely remember how we used to make a phone call or exchange messages back in the analog days. The Internet and cell phones are two of the most prominent examples of the influence of the Information Age, but there are many other types of digital communication technologies. 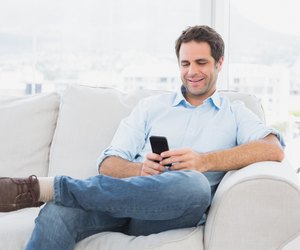 A man sitting on his sofa looking at his smartphone
credit: Wavebreakmedia Ltd/Wavebreak Media/Getty Images

The Internet and Email

In 1962, a researcher at the Massachusetts Institute of Technology described a "Galactic Network" of interconnected computers that could talk to one another. The idea of the Internet was born. Relying on packet switching -- the digital transfer of short bursts of data -- globally connected computer networks quickly developed into sophisticated digital communication technologies. Email over the network was introduced in the 1970s and has since grown into one of the most widespread forms of digital communication, both on the Internet and through private networks. Packet-switching protocols matured and speeds increased. In 1980, the first widespread computer virus crashed the global computer network.

In the 1990s, digital communication over networked computers emerged from limited use in the academic, government and business worlds to come into use by the public. The World Wide Web, the Internet on steroids, was described in 1991, the White House website appeared in 1993, and the first Internet advertising came online in 1994. As transmission speeds increased, the Internet evolved from principally one-way communication to a social two-way system -- Web 2.0 -- at sites like Facebook and Twitter.

The earliest generation of handheld mobile telephones relied on the analog communication technology of the conventional phone network. The first phones using digital communication, known as 2G phones, appeared in the early 1990s. Digital phone technology developed rapidly after that. The first text message was sent in 1993, and the transmission of other digital content, such as ringtones and advertising, followed shortly after. In 2001, 3G digital phone communication arrived, providing faster transmission and making broadband communication practical for multiple media such as voice, Internet and GPS. The 4G phones appeared later that decade, offering digital communication 10 times faster than earlier technologies.

Since 2009, the Federal Communications Commission has required TV stations in the U.S. to broadcast exclusively in digital format. The transition from conventional to digital television technologies made high-definition television possible and established the television as more than a simple receiver of transmitted signals. Many digital TVs are multimedia devices that display television programming, games, photographs and on-demand movies, stream Internet content, play music and handle recorded media like CDs and DVDs. As televisions become more interactive, they are evolving into true two-way digital communication devices.

Digital communications have become ubiquitous in modern society and encompass a wide variety of technologies. Remote controls, keyless entry devices, walkie-talkies, Bluetooth earpieces, GPS satellites, cash registers and credit cards are among the many technologies that communicate digitally with people and with other devices. Futurists have coined the term "The Internet of Things" to refer to the trend of enabling thousands of types of devices, from light bulbs to washing machines, with digital communication capabilities.

Given the sophistication of the instantaneous transmission of digital data, it can be easy to overlook the more mundane communication activities. We store digital data on many types of physical media, including CDs, DVDs, flash drives, tape and compact memory chips. Every time you hand a friend or colleague a file, whether you transfer it electronically or pass along a DVD, you are engaged in a form of digital communication.

The History of Car Phones

Around The Home
Entertainment
By: Dmitry Rashnitsov